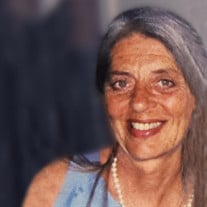 Christine Ingrid Gran, 76, of Traverse City, was spiritualized on October 19th, 2021. A woman that was strong, beautiful, kind, free spirited, highly educated and someone that always put others first. She was born in Highland Park, MI on February 10th, 1945 to the late Erik Gran and Rhea Ellen Smith. Growing up as an only child, her life turned into a wonderful blended family of 5 children when her Mother remarried. She graduated from Ferris State University with a bachelors in Business then a Masters from Michigan state in Retail Marketing. She then took her future aspirations to New York City where she explored her life and excelled in modeling and retail sales. After wanting to be closer to family she moved back to Michigan where she met her husband Stephen Cline. They had a desire to roam the country in their airstream and find the perfect place to open a restaurant and raise their family. They found that place and established their roots on Torch Lake and opened Bullwinkle's restaurant in Elk Rapids MI. Years later after they closed the restaurant, she wanted to be a stay at home mom so she could enrich her children's lives. Christine took a love of educating others, her passion and vast talent for art to become a substitute teacher for Elk Rapids Schools and TBA Career Tech Center. She loved to spread joy and happiness in all those she met. She was always a conversationalist with friends, family or strangers wherever she was. Later in life she devoted herself to a new direction in helping others doing legal research for various firms. She was always on top of the news and called her loved ones upon an impending storm or possible catastrophic event to make sure they had necessary items and would be safe. Her selflessness shined through her entire life. Christine was preceded in death by her Father Erik Gran, Mother Rhea Fay, Brother Jack Fay, Sister Judy Fay, Daughter Suzanne Cline Walthour, Brother-in-law Andrew Cain. She is survived by her children, Eric Cline of Traverse City, Kristin and Ashley Matthews of Plainfield IL, Gretchen Novorolsky of Fife Lake, and her twin Brother and Sister Dan Fay, Ellen Cain and their families. Mimi will be missed by her cherished grandchildren, Silas, Izzy, Cosmo Novorolsky and Teagan Matthews. A celebration of life will commence in the Spring of 2022. If you wish to donate, please do so in her name to the Women's Resource Center of Traverse City to help continue her passion of helping others.

Christine Ingrid Gran, 76, of Traverse City, was spiritualized on October 19th, 2021. A woman that was strong, beautiful, kind, free spirited, highly educated and someone that always put others first. She was born in Highland Park, MI on February... View Obituary & Service Information

The family of Christine Gran created this Life Tributes page to make it easy to share your memories.