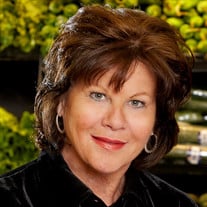 Christine Ellen (Deering) Kuhnke passed away peacefully but unexpectedly in her sleep on Monday morning, January 20, 2020, at her cottage in Curtis, Michigan. Christy was born on May 1, 1958, in Traverse City to Daniel and Ann (Hageman) Deering. She married the love of her life, Larry Kuhnke, on October 6, 2006, in Santa Fe, New Mexico. Christy grew up in the family business, Tom’s Food Markets, which her grandfather founded in 1946. She played, worked, and practically lived in the stores as a child and young woman. A 1976 graduate of Traverse City High School and captain of the TCHS cheerleading squad, she went on to pursue a business degree at Western Michigan University. After college, she began her professional career as a mortgage lender, choosing to work with low-income and first-time home buyers. She also assisted many veterans of the Armed Forces. In 2005, she returned to Tom’s, joining her father in an executive role running the family business. As the company’s president, Christy continued Tom’s strong and fundamental commitment to the Traverse City community through the development and support of local farms and businesses. Her father and grandfather would have been proud of her success with Tom’s, which was, in large part, due to her desire for perfection, her concern for people, and, most importantly, the mutual respect and appreciation she enjoyed with the Tom’s family of employees. Christy was dedicated to many charitable causes, including the community libraries in Old Mission and Interlochen, and she was an early contributor to Impact 100 TC, which combines the power of dynamic women to support and improve their communities. She was also a proud and very generous supporter of the City Opera House in Traverse City and the Erickson Center for the Arts in Curtis. Christy felt very blessed to call Michigan home and enjoyed its natural beauty and bounty. In her earlier years, she was an avid snow and water skier, once challenging herself to water ski every day of a summer, which she did. Christy was known for her love of birds and flowers, and most florists knew to put a bird in the arrangements for her. In 2014, she and Larry built a cottage in Curtis in the Upper Peninsula, and crossing the Mackinac Bridge was always, in her words, “a very fortunate experience.” Christy loved spending time there with visiting family and numerous friends, and on her last trip to Curtis she took with her an arrangement of flowers she had just received so she would not lose a single day’s enjoyment of them. Christy and Larry traveled every year in the spring and fall to various warm climate destinations. In 2019, they took a rare summer vacation – a cruise to Alaska - which was the most favored of all the places Christy had traveled. Christy was devoted to her many nieces, nephews, and grandchildren. She and Larry spent many happy days hosting family parties and spending time with family and friends at their home on Old Mission Peninsula. Surviving Christy is her beloved husband Larry, her mother, Ann (Robert) Witkop, sisters Jane (Matthew) Zimmerman, Nancy (Ed) Sands, Carolyn (Tobin) Decker, Michelle (Ian) Sterling, and Wendy Witkop, stepdaughters Carol Kuhnke (Elizabeth Janovic) and Chris (Scott) DeJong, and many nieces, nephews, and grandchildren. She was preceded in death by her father, Daniel L. Deering. Memorial services are scheduled as follows: Visitation on Thursday, January 30 from 4:00 to 7:00 pm at the Reynolds-Jonkhoff Funeral Home in Traverse City. Visitation is also scheduled for 10:00 to 11:00 am on Friday, January 31 at St. Joseph Catholic Church on Old Mission Peninsula with a Funeral Mass, officiated by Father Ben Rexroat, immediately following. Burial will be at Memorial Gardens as a private family service. In lieu of flowers, memorial contributions may be directed to Impact 100 TC, 526 West Fourteenth Street, #264, Traverse City, MI 49685, www.impacttc.org. Kindly share thoughts and memories with Christy’s family at www.reynolds-jonkhoff.com.

Christine Ellen (Deering) Kuhnke passed away peacefully but unexpectedly in her sleep on Monday morning, January 20, 2020, at her cottage in Curtis, Michigan. Christy was born on May 1, 1958, in Traverse City to Daniel and Ann (Hageman) Deering.... View Obituary & Service Information

The family of Christine Ellen (Deering) Kuhnke created this Life Tributes page to make it easy to share your memories.