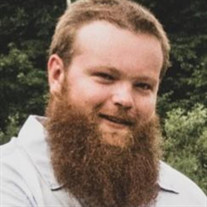 Christopher Michael Bell, 25, of Traverse City passed away on August 31, 2021 after sustaining injuries from a motorcycle accident. He will be greatly missed by his family and friends. Chris was born on December 29, 1995 in Traverse City to Mikel and Michelle Bell, and the baby brother to Kevin and Maria. He was affectionately known as Lil Man, Half-shell, Bro and an array of other nicknames. Chris was a soft spoken, gentle giant due to his big loving heart. He enjoyed riding dirt bikes, racing go-carts, playing baseball and snowboarding. He also enjoyed two tracking, hunting and fishing. He wasn’t afraid to call and ask for help if he got stuck and needed a jump or a pull, and was always ready to help out someone in need. In his younger years he was involved in 4-H and raised three Grand Champion meat rabbits. Later in life, his artistic skills developed and he was an excellent freestyle drawer which showed in his tattoos and other things he had made for people. Chris is preceded in death by his grandfather Joseph Lamie Sr., Uncle Travis Bell, and cousin Alyssa Bell. Chris is survived and greatly missed by his parents Mikel “Turtle” and Michelle Bell, brother Kevin Strieter, sister Maria (John) Steed, and nephews Michael Strieter-Elliot, Gunner Wise, nieces Kayden Kaltenbach-Bell and Olivia Strieter. Grandparents Lorraine (Joseph) Lamie, Patrick (Jan) Bell, Melisande Inman. Uncles Joe Lamie Jr., Jeff Lamie, Patrick (Susan) Bell, Chad (Stacey) Brigham, Joe Brigham Jr. and many more loving family and friends. (Including Loose Wheels Motorcycle Club) The visitation will be held on Thursday, September 9, 2021 from 6 to 8 pm at the Reynolds Jonkhoff Funeral Home. The funeral will also be held at the funeral home on Friday, September 10, 2021 at 11 am, with visitation beginning one hour prior. Burial will follow at St. Michael’s Cemetery in Suttons Bay. Memorial contributions may be directed to http://www.222none.org in place of flowers.

Christopher Michael Bell, 25, of Traverse City passed away on August 31, 2021 after sustaining injuries from a motorcycle accident. He will be greatly missed by his family and friends. Chris was born on December 29, 1995 in Traverse City to... View Obituary & Service Information

The family of Christopher Michael Bell created this Life Tributes page to make it easy to share your memories.

Christopher Michael Bell, 25, of Traverse City passed away on...