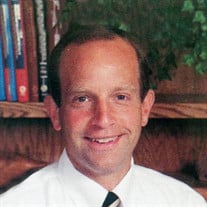 Christopher Randall Peregrine, age 56, went to his eternal reward on August 10, 2016 in his home in Traverse City surrounded by his wife and two daughters after an eight-year battle with cancer. He was born in River Forest, IL on May 14, 1960 to Moore W. Peregrine and Josephine Neal Peregrine. Chris attended Oak Park and River Forest High School, Purdue University’s Engineering program, and Northwestern University’s Orthotic and Prosthetics program. He began his professional career at the Rehabilitation Institute of Chicago. There he met his future bride and love of his life Joanne, and they were married in Oak Park, IL on March 23, 1991. They moved to Traverse City where Chris enjoyed 25 years of work at Teter Orthotics and Prosthetics. Chris enjoyed his colleagues immensely and was proud of the fine organization they build over the years. He loved the unique challenge of each case and deeply cared for his patients. What Chris found most meaningful was his role as residency director, passing his skill and compassion on the next professional generation. Chris was past President of the Midwest Chapter of the American Academy of Orthotists and Prosthetics. He was a member of the Rotary Club of Traverse City, serving on the Board and was a life-long member of the Presbyterian Church, where he served as Elder and Deacon. More than anything, Chris loved his wife and children and the opportunity to have raised them in beautiful Traverse City. He enjoyed hiking, biking, and cross-skiing with his family. Chris made sure his girls knew how proud he was of their accomplishments, personalities, and strong faith. He never missed the opportunity to tell them that they are beautiful and that he loved them so much. Chris is survived by his wife, Joanne; daughters, Molly and Kelly Peregrine of Traverse City; father, Moore Peregrine of Frankfort, MI; brothers, Jay of Frankfort, MI, Michael (Suzie) of Glencoe, IL, and Peter (Anne) of Appleton, WI; and sister, Deborah of Jonesboro, AR. He was preceded in death by his mother, Josephine. Visitation for Chris will take place on Friday, August 12 from 5 to 8 pm at Reynolds-Jonkhoff Funeral Home. The funeral service will be Saturday, August 13 at 11 am at the Presbyterian Church of Traverse City, Rev. Bill Myers officiating with a visitation one hour prior. For those wishing to give a gift in memory of Chris, contributions may be directed to TART trails, the Cowell Family Cancer Center, and Michigan Blood.

Christopher Randall Peregrine, age 56, went to his eternal reward on August 10, 2016 in his home in Traverse City surrounded by his wife and two daughters after an eight-year battle with cancer. He was born in River Forest, IL on May 14, 1960... View Obituary & Service Information

The family of Christopher Randall Peregrine created this Life Tributes page to make it easy to share your memories.