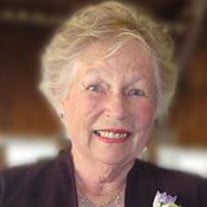 Clara Belle McManus, 89, of Traverse City died peacefully, at her winter home in Naples, Florida with her husband of 70 years, George, at her bedside. Clara was born on a cattle farm in Long Lake Township to Julius and Ellen (Courtade) Kratochvil, the 3rd of 6 children. She attended the Howard Rural School, TC Public Schools, and graduated from Saint Francis High School, class of 1948. On August 16, 1949 Clara married George A. McManus Jr. They moved to the Michigan State University Campus, where he attended college and she started classes at the St. Lawrence School of Nursing. The Lord had other plans though as the babies started arriving. Nine of ten children survive Clara: Lisa McManus {Stuart Saints}, Molly {Nick} Agostinelli, Peggy {Rick} Egelus, Kate {Mike} McDonald, Kerry {Jamie} Canellos, George {Laurie} McManus, John {Michelle} McManus, Bridget {Ron} Popp, Matt {Jackie} McManus along with 23 grandchildren, 36 great grand children and 1 great, great grand child. Also surviving Clara are sisters Eileen Milner, Luella Wilson, brother in law Jerry Benton, sisters in law Janet Chouinard, Jean Kratochvil, Leona McManus, Gloria McManus, and in laws Art and Judy McManus, Mike and Janet McManus, Frieda and Roger Thompson, and extended family too numerous to mention. Clara managed the cherry farm on Garfield Rd. and raised the family in the house where George and Clara lived together for 60 plus years. Their massive garden and fruit orchards helped feed the family as well as many hungry people in the community. She was committed to her faith, family, hospitality, and hard work, traits she encouraged in her children. Clara was a kind and gentle soul, but if there was a need, she labored to get the job done with grace and quiet determination Among her many accomplishments are: Appointments in 1973 and again in 1975 to the State of Michigan Agricultural Marketing and Bargining Board. She served as a member of the Zonta Club, the Farm Bureau, and was a supporter of the Grand Traverse Area Catholic Schools. Clara was a major fundraiser for the Grand Traverse Pavilions and the PACE Program, with Emeritus designation in 2019. She worked bake sales, taught 4-H, and opened her home for nearly 30 years to foreign exchange students from around the world. She loved her Detroit Tigers and Michigan State Spartans. Preceeding her in death are a daughter Rosemary Ann (deceased at birth), brothers Dr. Richard Kratochvil, Charles Kratochvil and sister, Naomi Benton, in- laws Francis McManus, Ronald and Antoinette Lints, D. Patrick McManus and son in law Amin (Moon) Nurmohamed. Internment took place on March 23, 2020. A Memorial Mass will be held at St. Francis Catholic Church in Traverse City on Monday, August 3 at 10:00 AM. The Family would like to thank all of Clara’s Caregivers but particularly Kate and Mike McDonald who took special care of our Mom to the end. In lieu of flowers Clara has asked that donations be made in her name to your choice of the following: Mass Intentions Friends of Clara McManus at the Pavilions Grand Traverse Area Catholic Schools

Clara Belle McManus, 89, of Traverse City died peacefully, at her winter home in Naples, Florida with her husband of 70 years, George, at her bedside. Clara was born on a cattle farm in Long Lake Township to Julius and Ellen (Courtade) Kratochvil,... View Obituary & Service Information

The family of Clara Belle McManus created this Life Tributes page to make it easy to share your memories.