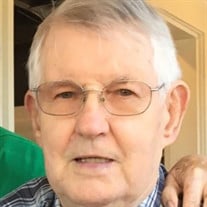 Hard working, loving husband, and supportive father, Clements John “CJ” Persik of Traverse City, Michigan (formerly of Cedar, MI) passed away at the age of 88 on Wednesday, April 20, 2022. He was born to John and Rose (Fleis) Persik on December 27, 1933, of Cedar, MI. CJ served proudly in the United States Army as a paratrooper in the 82nd Airborne Division. He was married to Mary Jane (Gildarski) Persik for almost 65 years. He built their home on Old Mission, where they raised two daughters together, Audrey Judith Draher and Angela Jayne. Also surviving are two grandsons, George and Chase Veres; great granddaughter Scarlett Veres; great grandson Jackson Veres; and two grand puppies he adored, Afayla Jane and Murphy Asher. After serving in the military, he became a licensed builder. He built and remodeled several homes in the surrounding Grand Traverse area. He enjoyed wood carving, making custom furniture, and reading. He was preceded in death by his parents, Rose and John Persik; two brothers and three sisters. A graveside service will be held at 2:30 p.m. on Saturday, April 30, 2022, in Oakwood Cemetery, 1720 Hannah Avenue, Traverse City, MI 49686. Under the auspices of the veteran’s honor guard and the United States Army, military honors will be presented. Those wishing to offer an expression of sympathy are encouraged to make a memorial contribution in CJ’s memory to a charity of one’s choice.

The family of Clements "CJ" John Persik created this Life Tributes page to make it easy to share your memories.