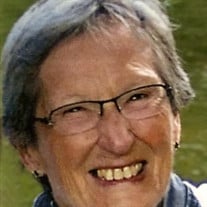 Cavitch, Cleo B. 11/14/1925 - 3/27/2019 The gift of life was lived with joy and gratitude by Cleo Lautner Cavitch, 93, who has now received the NEW LIFE of her eternal inheritance. She believed in God the Father, the Son, and Holy Spirit. Faith, family, and friends were of utmost importance as she devoted her life as a faithful servant, devoted wife, loving mother, caring sister, aunt, grandmother, great grandmother, and friend. Cleo has been reunited in Heaven with her loving husband, Joseph Cavitch. God blessed them with 57 years of marriage. She was also preceded in death by their infant son, Robert Joseph, as well as her parents Joseph and Florence Lautner, Joseph and Veronica Cavitch-Rusch, her brothers and sisters-in law Ralph and Mary Lautner, Jerome and Arlene Lautner, Lavern and Maxine Lautner, Jerome and Laura Korb. Cleo was a lifelong resident of Grand Traverse County. Her twin brother, Cletus Lautner, and many nieces and nephews continue to reside in the Traverse City area. Cleo and Joe unselfishly shared an abundance of love with their three daughters and sons-in law, Shirley (Dave) Fink, Patti (Jim) Redell and Mary (Hugh) McCormick. Their seven grandchildren, 16 great grandchildren and 3 great-great grandchildren were cherished blessings. Cleo partnered with Joe by using her clerical skills to assist with their business, Cavitch Oil Company. She played the accordion in her younger years and acquired tasteful cooking and baking abilities. Cleo enjoyed helping her neighbors, babysitting her grandchildren, painting, staining, and completing house projects for her children, sewing, knitting, dancing, and playing cards. Cleo was a master Euchre and Bridge player. She developed close friendships within her weekly Bridge groups. Cleo’s unconditional love, positive attitude, and gratitude captured many hearts. She was “an angel on earth” to her family and her spiritual presence will continue to uplift their lives. A Mass of Christian burial will be celebrated Tuesday April 23, 2019 at 11:00 am with visitation one hour prior, in honor of Cleo, at St. Francis Catholic Church. In lieu of flowers, memorial contributions may be directed to St. Francis of Assisi Catholic Church for Masses in Cleo’s memory, or to Northern Star Assisted Living (formerly Traverse Victorian Assisted Living) where Cleo received loving care and was surrounded by the staff’s joyful and affectionate presence.

Cavitch, Cleo B. 11/14/1925 - 3/27/2019 The gift of life was lived with joy and gratitude by Cleo Lautner Cavitch, 93, who has now received the NEW LIFE of her eternal inheritance. She believed in God the Father, the Son, and Holy Spirit. Faith,... View Obituary & Service Information

The family of Cleo B. Cavitch created this Life Tributes page to make it easy to share your memories.