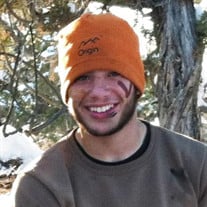 Colton Francis Roberts, 22, of Traverse City, passed away Wednesday, May 18, 2016. Colton was born February 4, 1994 to Cathy (Jasinski) O’Connor and the late Stephen Roberts, in Howell, MI. Colton was a free spirit his entire life. In his childhood, that free spirit led him to see the world and everything in it as his limitless playground. He loved to build things, and take them apart. He would spend entire afternoons constructing elaborate Lego structures, concentrating on each project so much that he would skip eating and couldn’t hear anything happening around him. As Colton grew up, his love of the outdoors also grew, and he gladly spent as much time as possible with his grandfather or Uncle Jimmy hunting, fishing, camping in the UP, and riding quads, snowmobiles, motorcycles or anything else with a motor in it. As long as he was outside and running free, he was immensely happy. Colton was a daredevil who had his foot on the gas and hand in the throttle. He may as well have disconnected the brakes on anything he drove or rode, since he never bothered to use them anyway. Colton had a big heart and loved his family with every last bit of it. He had an infectious smile and gave the best bear hugs in the world. Most of all, he loved his son, Aiden, more than anything else in the world. In the final years of his life, Colton struggled. Were he still alive today, he would ask that we never run out of compassion for those who find life too challenging or stumble on their way through it, and that we keep in mind that we may not know the unseen burdens that others carry. Colton is survived by his parents, Sean and Cathy O’Connor; son Aiden Kucharek Roberts; siblings Cody Roberts, Regan O’Connor, Ryan O’Connor, Evan O’Connor and Grace O’Connor; grandparents Frank and Myrna Jasinkski, and Rita O’Connor; and numerous aunts, uncles and cousins. Colton was predeceased by his biological father, Stephen Roberts. A memorial service was held Wednesday, May 25, 2016 at the Reynolds-Jonkhoff Funeral Home. The family asks that memorial donations in Colton’s honor be made to Third Level Crisis Center, Traverse City.

The family of Colton Francis Roberts created this Life Tributes page to make it easy to share your memories.