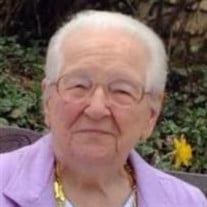 Born on May 11, 1915 to Albert St. Germain and Catherine (Ranowsky) of Detroit. Corrine oldest of 6 children outlived each of her siblings: Roberta, Raymond, Albert Jr., Madeline, and Gerald. She lived in Detroit, Lake Mills, WI and Traverse City. She died at French Manor Assisted Living in Traverse City on April 9, 2016, with her daughter Susan present. Corrine was supported and loved by the entire staff at the French Manor and the Hospice of Michigan staff. Corinne and Harry H. Duke married in the bustling metropolitan area of Detroit on April 27, 1935. Her mother-in-law moved in with the newlyweds a month after their wedding and stayed for 30 years; these were not peaceful years. Corinne and Harry had 7 children: Glen, Roy, Lee (short names meant to eliminate nicknames, but neighborhood friends all called for “Duke.” It pained her that she always had to ask “Which one?”), and then Catherine, Susan, Jon, and James. Corinne was a power-walker before there was a name for it. She cleaned her house ferociously; she attacked the ironing and planned the week’s menus according to sales flyers. Virtually every day she made meals from scratch, and they always included a vegetable and fruit. She liked meat on the bone. She hated any kind of shopping, though she treasured new shoes. She darned socks, used up leftovers, went without, and wore things out beyond repair before she replaced them. She loved to travel and visited most states and provinces of the US and Canada; she enjoyed a memorable 3 weeks in Europe. She read novels, solved crossword puzzles, sewed, embroidered, and crocheted. She gave practical assistance to family and friends. She loved certain classical music pieces and, later on, certain operas. She had a bit of vinegar about her. She was not sentimental, she was impatient and often times she was hard on herself. Since she was always hot, she called herself “a red-hot mama” which, after a few years, annoyed Susan to no end. She was a devout Catholic, volunteering at church regularly and never missing a Sunday Mass. Sunday rides were the norm whenever possible. She said, “I didn’t feel old until 3 of my kids were getting Social Security.” During the last dozen years, her skills and independence, memories and, finally, basic functioning fell away. She longed for home and the people in it from so long ago. Our fervent wish is that she is at peace and basking in the feelings of home and love and familiar companionship once again. Be at peace, Corinne. You did well. Surviving are Glen and wife Elenita of Taylor, Roy and Cheryl of Eddieville, KY; Jacqueline, widow of Lee, now living in Tennessee; Catherine and Jerry Meske of Fort Atkinson, WI; Susan of Traverse City; sister-in-law Leticia Mendez St. Germain of Puerto Rico. Harry and Corinne had 17 grandchildren, 17 great grandchildren, and several great great grandchildren. Harry died at age 80 in Fort Atkinson, WI in 1992. Son Jon was born weighing only one pound in 1954. The nuns at the hospital decided it would be too painful for Corinne to see Jon since he would soon die, and so he was whisked away. James died of leukemia at age 5. Lee died in 2008, age 69. Daughter in law Portia Duke died in 1994. Corinne grieved for the many others who went before. Details for an early summer memorial service will be published later. Please share your memories with the family at www.reynolds-jonkhoff.com The family is being cared for by the Reynolds-Jonkhoff Funeral Home.

Born on May 11, 1915 to Albert St. Germain and Catherine (Ranowsky) of Detroit. Corrine oldest of 6 children outlived each of her siblings: Roberta, Raymond, Albert Jr., Madeline, and Gerald. She lived in Detroit, Lake Mills, WI and Traverse... View Obituary & Service Information

The family of Corinne A. Duke created this Life Tributes page to make it easy to share your memories.