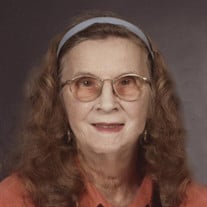 Corinne Mae (Stites) Fair, 89, of Acme, died peacefully in her home with her family at her bedside on Thursday, August 25, 2016. She bravely faced her health challenges with courage and perseverance to live, and ended her life with dignity. Corinne was born February 28, 1927 in Flint, MI to James and Josephine (McKay) Stites. She attended Waterford Village School through her 10th grade and graduated with honors from Clarkston High School in 1944. Corinne attended Michigan State University and received a Bachelor of Arts degree in English and Social Studies, a minor in French language, as well as a secondary teaching certificate. After college Corinne worked as a teacher for Central Lake High School from 1949 thru 1950, Waterford Michigan Village School from 1951 thru 1954, Flushing High School from 1958 thru 1960, Sturgis Elementary School from 1962 thru 1965 and the Bancroft Michigan Elementary School from 1969 thru 1985. She received her Master’s in Preliminary Education from Western Michigan University in 1969. She met her future husband Paul W. Fair before the start of her freshman year while attending a school dance at Michigan State University. From the first dance, the two were inseparable. They were married June 17, 1950 in a service in Waterford, MI. Corinne was a gentle, selfless woman who had a quiet spirit that belied an inner strength, and determination to bring love and fairness to those she met and those she loved. She never spoke harshly and gave of herself freely. Corinne had a passion for teaching and truly enjoyed the many years she spent in education. She loved to read; she was a real bookworm. She and Paul enjoyed traveling and they made many loyal friends. She was an excellent bridge player, enjoyed antiquing and watching birds and was known for her love of sweet desserts. She is survived by her husband Paul W Fair of Williamsburg; sons Alan T. Fair of Denver, CO and James P. Fair of Cave Creek, AZ; sister Patricia Clark of Waterford, MI; nieces Sheryl (Robert) Lorenz and Elaine Fair; nephews Russell (Teresa) Stites, Lawrence (Candy) Stites, Stewart Clark, John R Clark, Donald Clark, Craig Stites, Parker (Kate) Fair and John (Chelina) Fair; sister-in-law Norma Fair. She was preceded in death by her parents James and Josephine Stites and her brother Philip (Marcie) Stites; brother-in-law John Fair. A visitation for Corinne will be held on Monday, August 29, 2016 at the Reynolds-Jonkhoff Funeral Home from 6 p.m. to 8 p.m. A funeral service will be held on Tuesday, August 30, 2016 at Central United Methodist Church at 11 a.m., with visitation beginning at 10 a.m. Pastor Dale Ostema will officiate the service. Memorial donations in Corinne’s honor may be directed to Central United Methodist Church, 222 Cass Street, Traverse City, MI 49684.

Corinne Mae (Stites) Fair, 89, of Acme, died peacefully in her home with her family at her bedside on Thursday, August 25, 2016. She bravely faced her health challenges with courage and perseverance to live, and ended her life with dignity.... View Obituary & Service Information

The family of Corinne Mae Fair created this Life Tributes page to make it easy to share your memories.