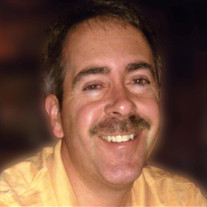 Traverse City - Craig L. Gay, 50, of Traverse City, passed away Saturday, December 1, 2018 at his home, surrounded by his family. Craig was born on Thursday, December 21, 1967 to Byron and Sheila (Borders) Gay in Ann Arbor. The family later moved to Traverse City. Craig graduated from Traverse City Central High School in 1986. Best described as a man with a heart of gold, Craig went out of his way to help anyone, never expecting anything in return. Everything he did was from his heart, a heart that radiated kindness, compassion and love. He was often referred to as Superman by loved ones, a nickname he truly embodied. Craig was a gifted locksmith and safe technician. Always learning and advancing in his trade to be the most prepared for any situation that arose- whether it was knowing the ins and outs of the latest tech advanced keys for cars or being able to duplicate a set of keys just from a picture- Any knowledge he could arm himself with, he knew would help someone, someday. In recent years, he was a manager in the hardware department at Home Depot. He deeply appreciated his Home Depot family, as much as they appreciated him. His greatest joy was spending time with his wife, children and grandchildren. Craig adored his dog Bentley and cat Sorcey. Bentley and Craig were often seen patrolling the neighborhood making friends with everyone they met. Craig and Yvonne attended West Side Community Church and he was a member of the Cedar Rod and Gun Club. He was a passionate outdoorsmen and car enthusiast. Craig is survived by his wife, Yvonne Doehring-Gay, whom he married on March 19, 2005 in Traverse City; children Brooke (Matthew) Filcek of Portland, Kasey (Brian) Stubbs and Tyler Doehring, all of Grand Rapids; grandchildren Josephine and Augustus Filcek, Charlotte and Imogene Stubbs; his parents, Byron and Sheila Gay of Traverse City his brothers William (Beth) and identical twin brother, Kevin (Mary Jane), all of Traverse City; his father in law, Donald Saffron of Benzonia, along with many aunts, uncles, nieces, nephews and friends, including a very special aunt, Pat Borders of Chelsea. Craig was preceded in death by his beloved uncle Ronald Borders and his mother in law Nancy Saffron. The family would like to extend their heartfelt gratitude to Craig’s team of talented doctors and nurses, as well as Comfort keepers, Area Agency on Aging, and Heartland hospice. A service is planned for Thursday, Dec. 6 at 1 p.m. at West Side Community Church to celebrate Craig. Memorial contributions may be directed to: The Multiple Sclerosis Foundation, 2977 Telegraph Rd., Ste. 1651, Southfield, MI 48304 (www.nationalmssociety.org); JDRF Great Lakes Chapter, 4595 Broadmoor Ave SE Kentwood, MI (www.jdrf.org/greatlakeswest/; The Epilepsy Foundation of Michigan, 25200 Telegraph Rd., Ste. 110, Southfield, MI 48033 (wwwepilepsymichigan.org).

The family of Craig L. Gay created this Life Tributes page to make it easy to share your memories.