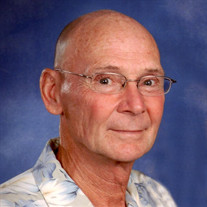 Craig Albert Owens, 72, of Traverse City, passed away November 22, 2019 with his loving family by his side. He was born on January 8, 1947 to the late Donald and Virginia (Deture) Owens Jr., in Traverse City. Craig was one of the original members of the Traverse City Track Club and annually competed in at least 3 marathons. Beyond his passion for running, he really enjoyed hunting, fishing and camping. He truly was a man of the outdoors. After spending 42 years with Cherryland Electric, Craig finally retired in 2009, opening up many more opportunities for family camping trips, time in the outdoors and traveling with his wife Linda. During the winter months Craig could often be found in his wood shop tinkering with a project. He enjoyed the final product of his accomplishments and loved to give them away as homemade gifts. His zest for life, the great outdoors and his love for his family will be missed greatly. Surviving Craig and missing him dearly are his wife Linda, his children; Melisa (Bill) Dittrich of Traverse City, Steven (Tracey) Owens of Greenwich, CT, Angela (Michael) Link of Frisco, TX and Nicole (Tom) Harner of Barto, PA. He is also missed by his pride and joy, his grandchildren; Ashley, Kyle, Charlie, Grey, Lauren, Matthew, Elizabeth, Madelyn and Sawyer. Surviving Craig as well are his siblings; Donald Owens III, Jim (Kris) Owens and Criss (Gary) Hartenbach as well as many nieces and nephews. He is preceded in death by his parents. A Mass of Christian Burial will take place on November 29, 2019 at 2pm at Christ The King Church with visitation one-hour prior. Father Raymond Cotter will officiate. Craig’s final resting place will be Oakwood Catholic Cemetery. In lieu of flowers, those wishing an expression of sympathy may choose to contribute to the Alzheimer’s Association or the Cherryland Humane Society in Craig’s honor. The family would like to thank Cherryhill Haven for all of their compassion, care and love for Craig and the family during his time there. Please visit www.reynolds-jonkhoff.com to share your memories and condolences with the family. Craig and his family are being cared for by the Reynolds Jonkhoff Funeral Home and Cremation Services.

Craig Albert Owens, 72, of Traverse City, passed away November 22, 2019 with his loving family by his side. He was born on January 8, 1947 to the late Donald and Virginia (Deture) Owens Jr., in Traverse City. Craig was one of the original members... View Obituary & Service Information

The family of Craig Albert Owens created this Life Tributes page to make it easy to share your memories.