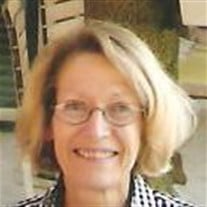 Cynthia McWhirter “Cindy” Dixon, 65, of Traverse City, passed away Wednesday, July 13, 2016 at Munson Medical Center in the presence of her family. Cindy was born on Sunday, July 30, 1950 in Fort Worth, Texas, the daughter of Donald and Billie Jean (Hampton) McWhirter. She attended schools in Houston, Texas and La Cañada Flintridge, California graduating from La Cañada High School in 1968. She continued her education at the University of Texas, earning her bachelors degree in education. She taught elementary school for several years in Dallas, Texas. She left teaching to work for a brokerage firm in downtown Dallas, Texas. Cindy relocated to Traverse City in 1985 where she met David Dixon. Cindy and David were married on January 25, 1989. Cindy loved to sing and play her guitar, enjoyed gardening, cooking and art, working in several mediums over the years. She attended Grace Episcopal Church in Traverse City. Cindy is survived by her husband David of Traverse City and their daughter Lauren, of Chicago. Cindy is also survived by her cousin Melissa Johnson of Traverse City, numerous nieces and nephews, and many dear friends. She was preceded in death by her parents and her sister, Kaye Keeler. Visitation for Cindy will take place Wednesday, July 20 from 6 until 8 p.m. at The Reynolds-Jonkhoff Funeral Home. The memorial service will begin at 1:00 PM Thursday, July 21 at Grace Episcopal Church, 341 Washington St., Traverse City with The Rev. Carlton Kelley presiding. The family would ask that Cindy be remembered through memorial contributions to the Cowell Family Cancer Center c/o The Munson Healthcare Regional Foundation, 1150 Medical Campus Drive, Traverse City, 49684.

The family of Cynthia "Cindy" McWhirter Dixon created this Life Tributes page to make it easy to share your memories.