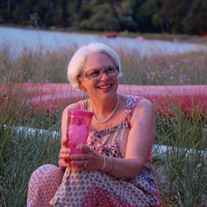 Cynthia Hewitt Newton was a loving wife, mother, grandmother, daughter, sister and friend. She passed away surrounded by loving family members, on August 5, 2021 at the age of 76. She is survived by her husband, Charles (Chuck) Newton, daughter, Megan Newton Clark (husband Dan), son, Charlie Newton (wife Lisa), and six beautiful grandchildren, Jackson Clark, Ainsley Clark, Emma Newton, Ellie Newton, Kate Newton and Lucy Newton. Cyndy was born in Ann Arbor, Michigan to Jean Carolyn Northway Hewitt Logie and Delbert Abraham Young Hewitt. She had fond memories of her early childhood growing up in Mt. Pleasant, Michigan. Following the death of her father at the age of 13, she moved to Grand Rapids and was raised by her mother and stepfather, Dr. James Logie. After graduating from East Grand Rapids High School, she attended Southern Methodist University before transferring to Michigan State University, where she earned a Bachelor of Arts in both telecommunications and English. After raising her two children, Cyndy returned to school earning a Bachelor of Fine Arts in interior design at Kendall College of Art and Design. Shortly after graduating from college, she attended a golf tournament with her aunt where she experienced “love at first sight” with one of the participants, Chuck Newton, who she wed and remained married for 54 years. Their married life led them from Ann Arbor, to Seattle, the Philippines, Grand Rapids and ultimately Traverse City where they lived a short distance from her grandparent’s cottage on Bower’s Harbor. She and Chuck wintered in Palm Springs, California where she was able to spend time with west coast family and friends. Cyndy took great joy in being a mother and grandmother. Her love was boundless and served as the foundation for her gift of making fast friends with absolute strangers. Cyndy loved gardening, cooking, entertaining and marveling at sunsets on Lake Michigan. She was a passionate advocate for civil rights, feminism, anti-racism and peace. She was a true humanitarian. Her love of music resulted in her always being the first one on the dance floor and led to her joining St. Cecilia’s Grand Band as a percussionist. She enjoyed being a sister in Kappa Alpha Theta at Michigan State University and served as the Kappa Alpha Theta house mother at University of Michigan. She was a member of the Mary Free Bed Guild, a board member of the Grand Rapids Women’s City Club, a volunteer for the American Association of University Women and the Council of the Performing Arts for Children. In addition to her volunteer work, she was an entrepreneur having started her own interior design firm and catering company. She was a lifelong learner of French, theology, physics, politics and investing. Cyndy always looked for new adventures ranging from hang gliding in France, to climbing Machu Picchu and most importantly, teaching her grandchildren to be prepared for tea with the Queen. Her melodic whistling, carefree laugh, soft kisses, warm cuddles, back tickles, cheerful personality, and bright smile will be deeply missed. A memorial service is scheduled for 11am on August 21st at St. Mark’s Episcopal Church in Grand Rapids. In lieu of flowers, please make a donation to the Southern Poverty Law Center (www.splcenter.org) on her behalf.

Cynthia Hewitt Newton was a loving wife, mother, grandmother, daughter, sister and friend. She passed away surrounded by loving family members, on August 5, 2021 at the age of 76. She is survived by her husband, Charles (Chuck) Newton, daughter,... View Obituary & Service Information

The family of Cynthia Hewitt Newton created this Life Tributes page to make it easy to share your memories.