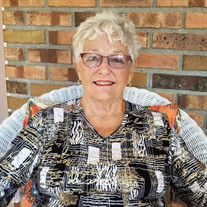 TRAVERSE CITY – Cyrilene K. Ankerson, 81, of Traverse City passed away Monday, July 5, 2021 at her home in the loving care of her family. Cyr was born December 12, 1939 in Peoria, IL to the late Milton and Lottie (Jamieson) Grover. She grew up on the Old Mission Peninsula in Traverse City on a cherry farm. Cyr and her brother Marvin had a magical childhood swimming in the bay and fishing. Cyr had fond memories of ice skating on East Bay during the cold winters. Cyr met the love of her life in Paul T. Ankerson when she was in 10th grade. They were married in 1957 and made their first home in Germany where Paul was stationed in the Army. Paul and Cyr had 4 children and raised them on the hill on River Road where Cyr has lived for over 60 years. Cyr has attended the Church of The Living God for decades. She has been a life-long Christian and calls Jesus Christ her savior. She was employed with TCAPS as a secretary. Cyr was a member of Church of The Living God where she taught Sunday school. She loved being with the children at school, they called her grandma. Cyr was also a member of Red Hats Society and Women’s Aglow Fellowship. Cyrilene’s hobbies include; square dancing, which she did for 18 years, reading her daily devotionals every morning, sitting on the deck enjoying the birds and deer and loved spending winters in Destin, Florida. Cyr was a huge supporter of her grandson’s motocross racing and was known as “racing grandma” the most passionate fan. Above all else, Cyr’s passion was her family, and feeding everybody that walked through her door. Cyr is survived by her son, Jeffrey Ankerson, daughters; Debra Ankerson, Joni Ankerson, Lori (Bruce) Eschenburg, grandchildren; Melanie (Kevin) Earl, Dustin (Sara) Ankerson, Kelby Ankerson, Joshua (Camron) Tompkins, Jacob (Stefanie) Tompkins, Ashley (Matt) Dilts and Chad (Brenna) Dilts, Paul and Holly Eschenburg, and great-grandchildren; Sabra, Brady, Taylor, Kylee, Morgan, Karsyn, Connor, Luke, Logan and Analeigh. She was preceded in death by her parents, husband, and brother Marvin Grover. A memorial service for Cyr will take place at 3:00 PM on Tuesday, July 13, 2021 at Church of The Living God. A visitation for family and friends will begin at 2:00 PM. Cyr and her husband Paul will be laid to rest at Grand Traverse Memorial Gardens. Memorial contributions may be directed to Church of The Living God Children’s Fund, 1514 Brimley Road, Traverse City, MI 49696. Please share a memory with Cyrilene’s family by visiting her tribute page at www.reynolds-jonkhoff.com. The Reynolds-Jonkhoff Funeral Home and Cremation Services is serving the family.

TRAVERSE CITY &#8211; Cyrilene K. Ankerson, 81, of Traverse City passed away Monday, July 5, 2021 at her home in the loving care of her family. Cyr was born December 12, 1939 in Peoria, IL to the late Milton and Lottie (Jamieson) Grover. She... View Obituary & Service Information

The family of Cyrilene Ankerson created this Life Tributes page to make it easy to share your memories.