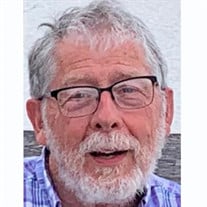 Dale Ovid LaBrie, 83, of Traverse City (formerly Petoskey and Harbor Springs), passed away May 26, 2021. He was born in Bay City on April 25, 1938, to A. Antonio and Albina (Rabidoux) LaBrie. Dale entered seminary at age 14. He was ordained and served as a priest for ten years. After leaving the priesthood, he remained active in the Catholic church as a layperson while beginning a new path as a medical social worker. In this capacity, he met Amy Belanger, a registered nurse. They were married in 1978. In the early 1980s, he spearheaded the group that first established hospice care in the Petoskey area. Later, he served as President of Hospice of Petoskey. He continued in the field until 1992, when he founded a home healthcare organization, Harbor Home Care. All his life, Dale’s interests remained passionate and eclectic. He was as comfortable in his backyard chicken coop as he was at the Metropolitan Opera. His example instilled a love of learning and the arts in his entire family. Dale leaves behind his wife Amanda “Amy” (Belanger); children Nicole (Greg Schutz) LaBrie, John (Dave Stetson) LaBrie and Adam (Marisa Izzard) LaBrie; grandchildren Benjamin Schaedig and Leona LaBrie; siblings Richard (Sharon), Antionette (Duane) Krause and Joel (Sue); as well as other extended family members and friends. He was preceded in death by his parents. A memorial service, held outside, at Reynolds-Jonkhoff Funeral Home, 305 Sixth Street, Traverse City 49684, will be held Wed. June 2, 2021 at 11AM. Visiting will begin at 10AM and continue until the time of service. A light lunch will follow in the funeral home’s garden. In lieu of flowers, please consider donating to the Alzheimer’s Association or to Hospice of Michigan. Dale and his family are being cared for by Reynolds-Jonkhoff Funeral Home, www.reynolds-jonkhoff.com

Dale Ovid LaBrie, 83, of Traverse City (formerly Petoskey and Harbor Springs), passed away May 26, 2021. He was born in Bay City on April 25, 1938, to A. Antonio and Albina (Rabidoux) LaBrie. Dale entered seminary at age 14. He was ordained... View Obituary & Service Information

The family of Dale Ovid LaBrie created this Life Tributes page to make it easy to share your memories.