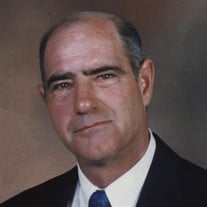 Traverse City - Dale M. Long, 74, of Traverse City and formerly of Copemish died on December 15, 2017. Dale was born on December 10, 1943 in Frankfort to the late Leo and Cleora (Somsel) Long. Dale married the love of his life, Yvonne M. Rossell on March 20, 1964 in Thompsonville at the First Congregational Church. Dale started his career at age 16 planting Christmas trees and created a very successful wholesale Christmas tree company. At age 18 he was promoted to foreman, and was the youngest foreman ever to work for M. Walter Tree Company out of Chicago, Illinois. In 1976, he began his own company, Long’s Christmas Trees. He later expanded his operation to Virginia and North Carolina where he grew Frasier Fir Trees. He retired in the late 1990’s. In his personal life Dale was an amazing father, nurturing his children and grandchildren through accomplishments and challenges. Dale was a member of the First Christian Church and lifetime member of the Masonic Order. He enjoyed the outdoors, playing golf, Fishing, and hunting, especially his hunting trips to Montana. He shot a 6X6 elk in Montana and was proud to finally have it out of the garage and in his home when he and Vonnie moved to Traverse City. Dale also enjoyed travel and going on cruises his favorite was a trip to the Baltic Sea. These are a few of the cherished memories his friends and family will remember. Dale was preceded in death by his parents, brothers Charles and Leon Long, sister Pauline and sister-in-law Shirley Ewing. Dale is survived by his wife of 53 years Vonnie, daughters Sara (Brett) Colecchio of Lake City and Susan (Richard) Rosenburg of Cadillac; grandchildren Kaitlyn, Kyler, Lucas Kory, Jarrett and Emmaline; great grandson Wyatt Jack: brother William (Yvonne) Long of Sodus: and sisters-in-law Joanne (Rod) Elmore and Connie (Mark) Tiffany. The memorial service will be held on Friday, December 22, 2017 at First Christian Church at 1:00 pm with visitation beginning at 12 noon. Memorial contributions in memory of Dale may be directed to the First Christian Church or the Hope Lodge, Grand Rapids, MI. Please visit www.reynolds-jonkhoff.com to share your memories with the family. The family is being served by Reynolds-Jonkhoff Funeral Home and Cremation services.

Traverse City - Dale M. Long, 74, of Traverse City and formerly of Copemish died on December 15, 2017. Dale was born on December 10, 1943 in Frankfort to the late Leo and Cleora (Somsel) Long. Dale married the love of his life, Yvonne M.... View Obituary & Service Information

The family of Dale M. Long created this Life Tributes page to make it easy to share your memories.