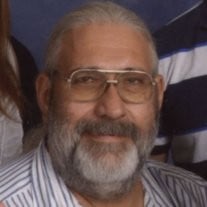 Daniel “Dan” Prusick, 55 of Traverse City, died unexpectedly of natural causes on Saturday, December 28, 2013 at his home. Dan was born on August 15, 1958 in Beaver Falls Penslyvania to the late Vincent Joseph and Felicia Sophia (Cieslak) Prusick. On May 7, 1983 Dan married Alice Marie Send at the Immaculate Conception Catholic Church. Together they lovingly raised two wonderful children Jared and Christine. Dan worked at Munson Medical Center as a Bio Medical Technician for 25 years. He truly enjoyed his job and his coworkers. In his spare time he could be found gardening, solving Sudoku, fishing or fixing something. He was an extremely gifted mechanic and blacksmith. Dan also enjoyed his family trips up to Mackinaw and Sault Ste. Marie to the reenactments. He also loved being a dedicated hockey dad and videoing each game for 17 years. Cooking was also very important to Dan. He had a deep polish heritage and enjoyed cooking and baking many special old family recipes. Family was most important to Dan. He truly loved spending time with them. Dan was a wonderful husband, father, brother and friend. His gentle sprit and kind soul will be held in the hearts of many forever. Surviving Dan is his wife Alice, children, Jared Daniel Prusick and Christine Marie Prusick, siblings, Anthea Markusic, Linda (Richard) Brzezinski, and Vincent (Paula) Prusick, in-laws, AJ Send, Bill Send, Roger (Karen) Send, Sue Grumley, and many special nieces, nephews, cousins and friends. Dan is preceded in death by his parents and brother-in-law Michael Markusic. Visitation for Dan will take place on Wednesday, January 1, 2013 from 6-8pm with a rosary held at 7:30pm at the Reynolds-Jonkhoff Funeral Home. Mass of Christian Burial will take place on Thursday, January 2, 2013 at 11am with a visitation beginning at 10am at the St. Francis Catholic Church. Burial will take place at the Grand Traverse Memorial Gardens. In lieu of flowers, memorial contributions may be directed to the East Traverse Federal Catholic Credit Union for Christine’s Nursing College completion.

The family of Daniel "Dan" Prusick created this Life Tributes page to make it easy to share your memories.