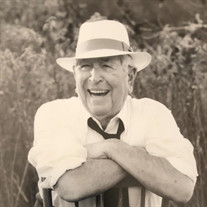 Daniel Edward Weber, “Dan”, 95, passed away Friday afternoon, October 9, 2020, at his home, surrounded by his children and grandchildren. Dan was born in Hannah, Michigan on April 13, 1925. He was the son of Anna (Zenner) and Jacob Weber. He was raised in a devout Catholic household, a faith that would sustain him throughout his 95 years. He graduated from St. Mary’s of Hannah High School in 1943. On September 8, 1956, he married Dorothy Mae Breithaupt at Immaculate Conception Church in Traverse City. Dan was a lifelong resident of Traverse City. He grew up on a farm along with his two sisters and eight brothers. He was raised in a home abound in faith, respect, love, and hard work. Dan loved the farming life, as hard as it could be at times, and he remained on the family farm until his late twenties. Being the social butterfly that he was, Dan, along with his brothers, would sometimes frequent “dance halls” as they were known in those days. On one of those nights Dan, now thirty-one years old, found himself at the Fireplace Inn in Karlin, Michigan. Soon an attractive, young gal (ten years younger to be exact!) caught his eye. He approached her and said, “Hey good lookin’, wanna dance?” Dorothy accepted his offer and soon it was the end of Dan’s bachelorhood! They married six months later and the rest is their history. Dan and “Dort” soon started their family and within three short years they became parents to Mark, Doug, and Marcia. Lisa, forever Dan’s baby, was born five years later. Their family was now complete! In the years following their marriage, Dan transitioned from farmer to small business owner and entrepreneur. As a skilled auto mechanic, he purchased his first gas station, Mobile, located on Front Street in Traverse City. Several years later, Dan purchased the Pure Gas Station at the corner of Eighth and Garfield in Traverse City. He was making a name for himself as a successful business owner and a trustworthy mechanic in the community. Life was good! In 1968 Dan sold the Pure gas station after locating a prime piece of real estate for his next business venture, the Texaco Service Station at 636 East Front Street. When Texaco left the state of Michigan, Dan continued his bustling business under the Phillips 66 brand, expanding to include a U-Haul rental operation as well. He could be found seven days a week at that gas station until his retirement in 2002 at the age of 77. Dan was especially proud of the fact that his gas station was the last full-service station in all of the five county area, concluding with a Jack O’Malley news special highlighting a bygone era. Furthering his dedication to the Catholic Church, Dan served in numerous ways at Immaculate Conception Parish. His volunteer work included The Gladhander, church ushering, bingo, and the funeral committee. In addition to this work, Dan was a loyal supporter of Aquinas College and countless non-profit organizations including Child & Family Services, Big Brothers Big Sisters of America, and the American Heart Association. Dan had a unique, special relationship with each of his four children as well as his grandchildren. Though very different, these bonds contained a common thread — unconditional love and support. He was a proud, dedicated father and grandfather. He was generous with his love and affection, always quick to forgive and “move on.” Dan loved watching and listening to Tiger baseball, bird watching, and fixing things around the house — rarely could he sit still and do nothing! Without a doubt, Dan’s favorite hobby was his family! That family included not only his children and grandchildren, but also his ten siblings, their spouses, many nieces and nephews as well! Never did he miss a graduation, a wedding, a funeral, or the monthly “Weber breakfast.” Dan, known as Papa and Papi, was an ever-present figure at all of his grandkids’ many academic, sporting, and religious events. He was a much-loved fan and proud supporter of TC Trojan hockey, as well as many other sport teams his grandchildren participated in over the years. One of Dan’s most treasured traditions was gifting all of his children and grandchildren a car for their sixteenth birthday. This was a unique Weber tradition in which both Dan and Dort found great pleasure and pride… as did the kids! Dan is survived by his children, Mark Weber of Traverse City; Douglas Weber of Lady of the Lakes, Florida; Marcia Weber (Nick Nixon) of Traverse City; Lisa Weber Wisniewski (Paul) of Traverse City; grandchildren, Dane and Danielle Macdonell of San Francisco, California; Cooper Macdonell of Chicago, Illinois; Kenneth (Kelsi) Wisniewski of Chicago, Illinois; Lily Wisniewski of Traverse City; Dr. Rob Gielczyk (Dr. Jen Vis-Gielczyk); great grandchildren, Willa and Wren of West Olive, Michigan; sister, Sr. Aquinas Weber of Grand Rapids; brothers, Raymond of Traverse City; Jay (Donna) of Buckley; and Jack (MaryEllen) of Grand Rapids; sisters-in-law Thelma of Traverse City; and Barb of Traverse City. Dan was preceded in death by his parents, his wife Dorothy, brothers Carl (Patricia) Paul; Clarence; Ambrose (Ruth); Vince (Lou); sister Margaret (Dick) and numerous nieces, nephews, and cousins. Those wishing to make a memorial contribution are encouraged to consider giving to Child & Family Services of Northwestern Michigan and the Mary Free Bed Foundation Attn: MFB Traverse City Rehabilitation Visitation will be held on Wednesday, October 14, 2020 from 5 – 7:30 pm at the Reynolds Jonkhoff Funeral Home. The funeral mass will be celebrated on Thursday, October 15, 2020 at Immaculate Conception at 11:00 am. Interment will follow at Oakwood Cemetery.

The family of Daniel "Dan" Weber created this Life Tributes page to make it easy to share your memories.