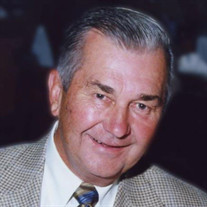 David Lee Benson, 85, of Traverse City passed away on November 19, 2021. David was born on August 19, 1936 in Stambaugh to Edwin and Ellen Benson. Dave served three years in the National Guard and five years in the reserves. He graduated from Everett High School in Lansing and then entered the electrical apprenticeship program. Upon completion he started Quality Electric which provided commercial and industrial services in the Lansing area, while also serving on the apprenticeship board. He was a member of NECA and the IBEW for 66 years. Dave also started Benson Industries. He received several awards for his aviation products. He was an instrument rated pilot and enjoyed attending AOPA conventions where he would sell his inventions. In his free time, he enjoyed hunting out west. He also cherished his Century boat with sleeper and galley. It was perfectly suited for exploring the Great Lakes and he and his family had many fun times while on board. One of his many legacies is the light house that he built by hand that graces the shores of Long Lake in front of his home. A celebration of turning on the lights was attended by many family and Long Lake friends. While he and Joan were raising their family weekends were spent at the family cottage at Horsehead Lake. Later years were spent at Long Lake where the door was always open for family to enjoy adventures afforded by lakeside living. Holidays were also special to David, especially the 4th of July when the whole family gathered together. Grandpa could always be counted on to add fun to the mix. David will be remembered for his generous and kind spirit, willingness to help others and deep love he had for his family. David is survived by his wife of 66 years, Joan; son Mark (Susan), daughter Cheryl (Bob) Sayer, son Bryan Benson; grandchildren Joel (Jessica), Jeremy (Nicole), Matthew (Gloria), Chad, Heidi (Brian); great grandchildren Bryanna, Lane, Lexi, Will, Clayton, Addison, Hailey, Hunter, Blake and Bennett; brother Donald (Alice) Benson and numerous nieces, nephews and extended family members and friends. Interment will take place in the spring at Linwood Cemetery. Memorial contributions in his honor may be directed to the Long Lake Association. P.O. Box 257, Interlochen, MI 49643.

David Lee Benson, 85, of Traverse City passed away on November 19, 2021. David was born on August 19, 1936 in Stambaugh to Edwin and Ellen Benson. Dave served three years in the National Guard and five years in the reserves. He graduated... View Obituary & Service Information

The family of David Lee Benson created this Life Tributes page to make it easy to share your memories.

David Lee Benson, 85, of Traverse City passed away on November...