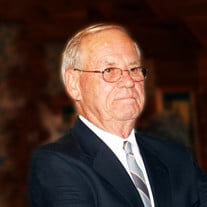 David Arthur Briggs, Sr., 77, of Traverse City died Monday, November 16, 2015 at Traverse Victorian Senior Living in Traverse City. David was born in Pontiac on Tuesday, May 24, 1938 to Theodora (Lawton) and Chester Arthur Briggs. He married Sharon Irene Beatty on March 16, 1957 at Bethany Baptist Church in Pontiac. David retired as a switchman for Bell Telephone after twenty years of service. He then worked at ACE Telephone and moved on to retire from Century Telephone after another twenty years of service. Dave’s passion was building, and it was evident through the many homes he built for himself and his children. He was active in their church downstate where he taught Sunday School. He enjoyed hunting and fishing, and also was an avid trapper and duck hunter when he was younger. The most important thing to David, however, was his family. He was a devoted son, brother, husband, father, grandfather, and great grandfather, and would drop everything to help when anyone called. He is survived by his children, David, Jr. (Mary) of Traverse City, Joe of Kingsley, Lonna (Hank) Ramsby and Leann (Steven) Winowiecki , of Traverse City; his beloved grandchildren, Kristina, Tamra, David III, Joe, Jr., Mark, Heather, Tyler, Jason, Miranda, and Hannah. He is also survived by his great grandchildren, Allen, Kendra, Jacob, Joey III, Isaac, Jimmy, Sarah and Oliver. David’s brothers, Daniel of Maine and James (Judy) of North Carolina also survive. He was preceded in death by his wife Sharon on September 22, 1999. Visitation for David will take place from 6 until 8 p.m. Thursday, November 19 at the Reynolds-Jonkhoff Funeral Home. The funeral service will begin at 11 a.m. Friday, November 20, also at the funeral home, with Chaplain Ron White of Hospice of Michigan officiating. Burial will be in Grand Traverse Memorial Gardens. Memorial contributions may be directed to Hospice of Michigan (10850 nE. Traverse Hwy. Suite 1155, Traverse City, MI 49684 or online www.hom.org) in David’s name. Please share your favorite memories and thoughts with Dave’s family at www.reynolds-jonkhoff.com. The family is being served by Reynolds-Jonkhoff Funeral Home and Cremation Services.

The family of David Arthur Briggs Sr. created this Life Tributes page to make it easy to share your memories.