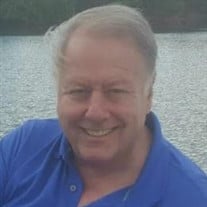 David L. Bump, 70, of Traverse City passed away Thursday, June 17, 2021 at home while enjoying his peaceful front porch with his wife. David was born on May 8, 1951 in Hobbs, New Mexico to the late Orville and Rachel (Alexander) Bump. He married Ruth “Rota” Frances Harris on September 9, 1977 in Albuquerque, New Mexico. Together they raised two wonderful sons Gary and Andy. He attended New Mexico Jr College and Arizona State University where he played on the golf teams at each school. David, like many of his friends had passion for work in the oil fields, especially in New Mexico and West Texas where he worked for many years. However, David’s greatest joys were spending time with family and friends. He enjoyed fishing, whether it be in Traverse City or on Lake Martin Alabama where his oldest son Gary and family live. He also enjoyed tinkering with his classic cars and trucks, with his first project being a 1955 Chevy 3100 which he restored with his older brother Gary Ferguson. David considered spending this time with his brother about as good as it got. He loved to eat out, especially at Sparky’s Diner, J&S Hamburg and Mode’s Bum Steer, however he loved any place he could be with friends and family and have a good ribeye steak. When not spending time watching the sun rise on the Old Mission Peninsula or deer running through his Acme hayfield, he and Rota took many road trips around the country with their beloved dog Colt (who David had a different name for). Many of these trips included visiting Rota’s family in New England where David was one of the gang. David was proud that at the holidays, he and his son Andy could go to local stores and be lay-a-way angels. Giving back was especially important to David and he made sure that his sons would follow in his footsteps. David was one of a kind with his southern accent that will be deeply missed by all who knew and loved him. Surviving David is his wife Rota, son Gary (LaToya) Bump of Alabama, Andy Bump of Traverse City, grandchildren, Markevious, LaRobbie, Mikhia; his brother Gary (Linda) Ferguson, brother-in-law’s and sister-in-law’s, George (Maureen) Harris, Bobby Harris, Charlann (Ronnie) Holland, Mary Franklin, Betty Harris, David (Lisa) Harris, Eddie Harris, Bill (Rachel) Harris, Anne (Ed) Wise, several nieces, nephews and cousins, and many other loving family members and friends. David is preceded in death by his parents, Rota’s parents George and Ruth, brother-in-law’s Stephen Harris and Richard Harris, and sister-in-law Marcia Harris. A funeral service will be held at 11am on Sunday, June 27, 2021 at the Reynolds-Jonkhoff Funeral Home with a visitation beginning at 10am. Burial will take place at the Peninsula Township Cemetery immediately following the services. Following the burial, there will be a celebration of David’s life at the hayfield / barn. In lieu of flowers, memorial contributions may be directed to the Traverse City Jr Golf Association or National Writers Series.

David L. Bump, 70, of Traverse City passed away Thursday, June 17, 2021 at home while enjoying his peaceful front porch with his wife. David was born on May 8, 1951 in Hobbs, New Mexico to the late Orville and Rachel (Alexander) Bump. He... View Obituary & Service Information

The family of David L. Bump created this Life Tributes page to make it easy to share your memories.