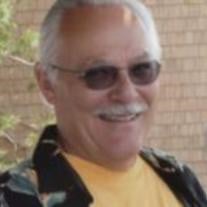 Traverse City - David Lee Erlewein, 69, of Traverse City passed away July 20, 2012 at Munson Medical Center after a short but valliant battle with cancer. Dave was born on April 25, 1943 in Douglas to the late Edward Michael and Julianne (Claeys) Erlewein. Dave grew up in Fennville, and after high school studied Engineering at University of Michigan and Western Michigan University. Dave's love of animals took him to Michigan State University where he graduated in 1967 with a degree in veterinary medicine. After completing his studies he began his career in Wyoming from 1967-1973 at Wyoming Animal Hospital. On April 28, 1973 he married Kathy Raymond in Wyoming. Together they moved to Traverse City where he began working at Grand Traverse Veterinary Hospital until 1981. He relocated to Oakwood Veterinary Hospital until 2002 at which time he returned to Grand Traverse Veterinary Hospital. He was the lead author of the veterinary text Instructions for Veterinary Clients. He also was a contributing veterinary author for several magazines for Village Press Publications. He was a member of several Veterinary Medical Associations. Dave always mentioned how happy he was that his sons Joe and Andy had such diverse interests, allowing him to pursue his own passions for both technology and sports all the while cultivating deep friendships with them individually. Dave was an amateur radio operator, holding the highest amateur radio license, the Amateur Extra Class. He shared this passion with his son Joe. He was a Volunteer Examiner for the amateur radio licensing program. Since the early 1990s he attended the annual Hamvention in Dayton, Ohio for amateur radio lovers. He was also a board member of the Cherrryland Amateur Radio Club where he was the editor of the Cherry Juice, the club's newsletter. His computer was well used as he liked to keep current with advancing technology. Go Green! Go White! Dave was an avid supporter of Michigan State Athletics with his son Andy. He was a season ticket holder for the football season and enjoyed tailgating and cheering on the Spartans. He was also excited to support the MSU Basketball team at both home and away games including their memorable season in 2011 when he followed them to Indianapolis for the Final Four. Dave was also a supporter of high school athletics, especially St. Francis basketball and football teams, "Go Glads!" and the Rochester High School basketball team where his son Andy coaches. Dave also had a love for music, playing banjo and guitar. He especially enjoyed listening to and playing bluegrass music. In his early years, he played rhythm guitar with his band The Relix. Dave was the ultimate handy-man and enjoyed spending time in his workshop. He remodeled his home several times where he proudly flew the American Flag above the Michigan State Flag. In recent years he developed a love for wood working and has left several gifts and mementos for his family. Another one of Dave's hobbies was restoring Cushman Motor Scooters. One of the recent highlights of his life was riding his Cushman Eagle at the Indianapolis Motor Speedway. During the winter he enjoyed travelling with Kathy to Florida for vacations with his sister Barb and his "brother from another mother" Ron. Above all else, Dave loved spending time with his family. To quote Dave, he was simply "insane" about them. Surviving Dave is his wife of 39 years, Kathy, his sons Joseph (Kaylee) Erlewein and Andrew (Erica) Erlewein and his grandson Julian Erlewein. He is also survived by his sister Barbara (Ron) Roth, sister-in-law Dolly Steed, brothers-in-law Dave Raymond and Jeff Raymond, nephews Michael (Michelle) Roth, Patrick (Michael) Roth, Bruce (Lynn) Roth, niece Pamela (Tom) Prendergast, niece-in-law Laurie Roth and many great nieces and nephews. Dave was preceded in death by his parents and nephew Scott Roth. Visitation for friends and family will take place on Tuesday, July 24, 2012 at the Reynolds Jonkhoff Funeral Home from 3 until 7 pm. Mass of Christian Burial will take place on Wednesday, July 25, 2012 at 11:00 am at Immaculate Conception Catholic Church. Memorial contributions in memory of David may be directed to MSU College of Veterinary Medicine's "Lucky" Fund or A.C. Paw. http://www.cvm.msu.edu/hospital/giving-donations/lucky-fund-for-needy-animals

Traverse City - David Lee Erlewein, 69, of Traverse City passed away July 20, 2012 at Munson Medical Center after a short but valliant battle with cancer. Dave was born on April 25, 1943 in Douglas to the late Edward Michael and Julianne... View Obituary & Service Information

The family of Dr. David Lee Erlewein created this Life Tributes page to make it easy to share your memories.