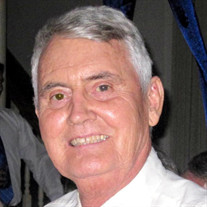 David Lloyd Ford, 78, of Traverse City passed away at home with family at his side. He was born in Royal Oak, Michigan, on June 16, 1943. He was the youngest child of Gerald and Virginia (Brabbs) Ford and grew up in Ferndale, Michigan. David spent 2 years in the U.S. Army, 1964-66. David joined the Michigan State Police in 1967, and served 31 years, the last 10 years at the Traverse City District Headquarters. He retired as a Sergeant in the Traffic Services Division. David married Marlene Taylor, the love of his life, in 1978 in East Lansing, Michigan. They lived in South Lyon, MI, for 10 years, and then moved to Traverse City in 1989. They were blessed with two sons, David and Jason, whom he has loved and guided throughout their lives. As his children grew, he was very active in their sports, Boy Scouts, music, and church activities. He coached the boys in baseball for several years. He was also Scoutmaster of Troop 35 of Willow Hill School, and participated in many camping outings and summer camps. David and Marlene attended countless sporting events in football, track and field, wrestling, as well as orchestra concerts and competitions. David also logged numerous hours transporting the boys and their friends to area ski resorts through all of the treacherous Northern Michigan weather. David had a love for dogs, both his own or his kids’, and he insisted they ride in the car with him, wherever he went. Buddy and Ranger, our Golden Retrievers, gave him much joy over the years. David prided himself in keeping his lawn green and lush, and tending his flower and vegetable gardens. David is survived and missed dearly by his wife of 43 years, Marlene; sons David (Karen) Ford of Ypsilanti and Jason (Amy) Ford of Berkley; brother Dennis of San Rafael, CA; brother-in-law George Young of Muncie, IN; and three grandchildren, Mason, Mila, and Lilah. Those wishing to make an expression of sympathy may consider a contribution to Traverse Bay United Methodist Church or Golden Retriever Rescue of Michigan in David’s name. A memorial service is being planned for 2022. David and his family are being cared for by the Reynolds Jonkhoff Funeral Home and Cremation Services.

David Lloyd Ford, 78, of Traverse City passed away at home with family at his side. He was born in Royal Oak, Michigan, on June 16, 1943. He was the youngest child of Gerald and Virginia (Brabbs) Ford and grew up in Ferndale, Michigan. David... View Obituary & Service Information

The family of David L. Ford created this Life Tributes page to make it easy to share your memories.

David Lloyd Ford, 78, of Traverse City passed away at home with...