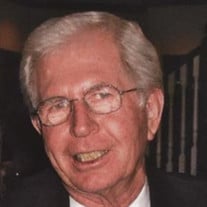 Dr. David A. Fultz, passed away on Wednesday, April 22nd, 2020 at the age of 88 in Traverse City, Michigan. He is survived by his wife of 20 years, Susan Damm Fultz and a large and loving family. A Michigan native, Dave was born to Homer and Vera Fultz in Jackson, where he excelled at racing stock cars and running cross country. He earned a scholarship to Michigan State and continued to run cross country with the Spartans in East Lansing. He was drafted and served as an Army medic at Fort Lewis, Washington, before returning to MSU and completing his Masters degree in educational administration. He married Joyce Jordon in 1953, and began his career in education as a teacher and coach. He created the first ever cross-country program at East Jackson High School and led them to 2 state championships, while also coaching track and basketball. After eight years, he moved on to Jackson Parkside High School, teaching history and coaching cross country and track, and was then named assistant principal. While pursuing his Education Specialist degree, he was hired as principal of Boyne City High School in 1971. Only a year later, the school would become part of the newly created Twin Valley Public School District and David was called on to serve as Superintendent. He earned his Doctorate of Education from MSU and would go on to serve as Superintendent of Schools in Godwin Heights (MI), Bay City (MI), and Binghamton (NY) before concluding his education career with 11 years of service as Grand Blanc (MI) Superintendent. Even in retirement, he served many school boards as a consultant for Superintendent searches. He was always an active member in the community, refereeing high school football and basketball with his boyhood friend Charlie Testa, serving as a church elder, organizing Chamber of Commerce fundraisers, and was an avid golfer, carding two holes in one on the links. Known for his good-natured sense of humor, Dave leaves behind many close friends who will greatly miss his people-friendly personality. He is survived by his sister, Carol Hammerle (Edward) of Jackson, MI; three children; Sherrie M. Moody (Michael) of Port Charlotte, FL; Brian D. Fultz (Lori), of Plano, TX; and Lori J. Birman (Steven) of Canton, MI; two stepchildren, Elizabeth G. Militello (Matthew) of Raleigh, NC; and Martha G. Thorell (Daniel) of Traverse City MI; eight grandchildren; Adam Moody, Erin Moody and Kevin Moody; Eric Fultz and David Fultz; and Jordon Birman, Taylor Rossman, and Morgan Birman; and seven step grandchildren; Dominic Militello, Luke Militello, Gabriel Militello and Oscar Militello; and Benjamin Thorell, Henry Thorell and Peter Thorell; two nephews, Steven Ziegler and Jeff Ziegler, a niece, Julie Ziegler, and seven great grandchildren. He was predeceased by his first wife, Joyce Jordon Fultz, and a sister, Evelyn Fultz. A memorial and interment at Great Lakes National Cemetery in Holly, MI will be announced at a later date. Reynolds-Jonkhoff Funeral Home in Traverse City is hosting a life tribute page on line at www.reynolds-jonkhoff.com where memories of Dave may be shared. In lieu of flowers, contributions can be made to the Grand Blanc Education Foundation or to Alzheimer’s Association.

Dr. David A. Fultz, passed away on Wednesday, April 22nd, 2020 at the age of 88 in Traverse City, Michigan. He is survived by his wife of 20 years, Susan Damm Fultz and a large and loving family. A Michigan native, Dave was born to Homer and... View Obituary & Service Information

The family of David Arlo Fultz created this Life Tributes page to make it easy to share your memories.