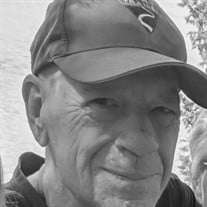 David Joe Hicks, 82, passed into his next life on Tuesday evening, August 24th, at home and at peace while surrounded and supported with love by his family. They know he is finding woods and trails to explore, lakes and rivers to paddle, snowy slopes, and undoubtedly his own workshop to make improvements along his way. Dave was born on July 17, 1939 in St. Louis, MO to John Ellis Hicks and Elizabeth Caroline Clark Hicks. He married Judith Myra Faris on June 24, 1961 at Torch Lake, MI following a seven year courtship that began in high school. In 1963 he earned a bachelor's degree in mechanical engineering from the Missouri School of Mines and Metallurgy (now the Missouri University of Science & Technology) in Rolla, MO. His decades-long career in engineering began in Traverse City with Parsons Corp., then the world’s largest manufacturer of helicopter rotor blades. Dave brought his expertise and enthusiasm to a long list of volunteer causes and organizations, including the GT Ski Club, North American VASA, the North Country Trail, TART Trails, Habitat for Humanity and Mission Trips for Hurricane Recovery. He was also a valued helper for friends with challenging projects, large and small. But even with so much to occupy his time, Dave always put his family first, and loved enjoying time spent and fun activities with his wife, children and grandchildren. Dave embodied the “we can do this” spirit of his growing community, and without fuss or fanfare worked to make things better than how he found them. Dave was preceded in death by his brother Bruce and is survived by his wife Judy, their three children, Don (Gretchen) Hicks, Diane (Eric) Hines, and Sharon (Mark) DeMeester, and grandchildren Heidi and Ben Hicks, Rachel and Stuart Miller, and Zach, Sam, and Anna DeMeester. For those who wish to make a memorial contribution, Dave suggested Habitat for Humanity or your local Humane Society. Visitation was held, August 29th from 4-7 pm at Reynolds Jonkhoff funeral home in Traverse City, MI. Anyone touched by Dave is welcomed Sunday, October 17, 2021 noon-4pm at The Lodge at Hickory Hills Recreation Area, 2000 Randolph Street, Traverse City, MI

David Joe Hicks, 82, passed into his next life on Tuesday evening, August 24th, at home and at peace while surrounded and supported with love by his family. They know he is finding woods and trails to explore, lakes and rivers to paddle, snowy... View Obituary & Service Information

The family of David Joe Hicks created this Life Tributes page to make it easy to share your memories.

David Joe Hicks, 82, passed into his next life on Tuesday evening,...