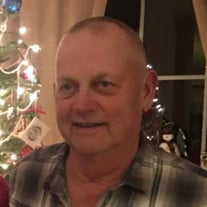 David Donald Kroupa, 76, of Traverse City passed away on the family farm on Tuesday, January 19, 2021. Those who knew him well know that he would have said he “peeled out of formation.” David was born on April 25, 1944 in Traverse City to the late Donald and Evelyn (Belleville) Kroupa. He married the love of his life Joan Marie Lautner on June 22, 1968 also in Traverse City. Together they lovingly raised four wonderful children. David served our country in the United States Coast Guard. He attended Ferris State University and earned a degree in automotive repair. This served him well in his many years on the family farm and inspired many original equipment designs. One of the first farmers to embrace viticulture on Old Mission Peninsula, David and Joan founded the only winery on the Peninsula owned and managed by centennial farmers. David’s business savvy and entrepreneurship, in partnership with Joan and his son John, resulted in the preservation of hundreds of acres of agricultural property. An active member of the community, David was chief of the Peninsula Township volunteer fire department in the 1980s, a member of the Grand Traverse Fruit Council, and an active member of the Peninsula Fruit Exchange coffee clache. He loved to ride his golf cart around the farm and enjoyed hunting and fishing. David will be remembered for his work ethic, entrepreneurship, dry sense of humor, and most importantly his love of family. Surviving David is his wife Joan of 53 devoted years, children, Michelle Kroupa of Traverse City, Mary (Scott) Wells of Wellesley, MA, John (Sarah) Kroupa of Traverse City, Stephanie (Ryan) French of Lombard, IL, grandchildren, Charles, Evelyn, Samuel, Meredith, Oliva, Annette, and Jackson, siblings, Marilyn (Jan) Linderman, Nicholas (Kathy) Kroupa, sister-in-law Karol McLain and many other loving family members and friends. David is preceded in death by his parents and his brother John. A visitation for family and friends will take place at the Peninsula Cellars Tasting Room on Saturday June 19 from 1-2pm with a memorial service and military honors beginning at 2pm. Per the family’s request, in lieu of flowers memorial contributions may be directed to the Juvenile Diabetes Research Foundation (JDRF) or MD Anderson Cancer Center. Kindly share thoughts and memories with David’s family at www.reynolds-jonkhoff.com.

The family of David Donald Kroupa created this Life Tributes page to make it easy to share your memories.

David Donald Kroupa, 76, of Traverse City passed away on the...