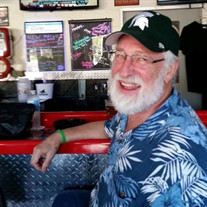 TRAVERSE CITY - David Irving Lemmen of Traverse City passed away from Covid-19 at age 75 at Munson Hospital in Traverse City, MI on Thursday February 4, 2021. Dave was born on July 28, 1945 in Holland, MI to Wayne and Carleen (Stroop) Lemmen. As a young boy the family moved around to various cities where his father was a pastor, he graduated from Kelloggsville High School in 1963. After high school Dave joined the army where he enjoyed being stationed in Germany. He then enrolled at Michigan State University and went on to receive a Bachelor of Arts in Education in 1971 and a Master’s degree in 1975. His son, Scott, was born in 1972 and daughter, Cara, in 1973. Dave spent 15 years teaching at Hayes Middle School in Grand Ledge, MI. He later relocated to Traverse City and married his wife, Carol, in 1991. Dave spent the remainder of his career working for Sears, and after his retirement did part time work for Child and Family Services of Northwest Michigan. Dave loved making connections with people; he was outgoing and optimistic and made friends wherever he went. After the passing of his wife, Carol, Dave volunteered for Gift of Life Michigan using his connections to fundraise and spread awareness of organ donation which had saved Carol’s life years ago. Dave enjoyed gardening, fishing, playing cards and rooting for Michigan State sports teams. Later in life he developed a passion for traveling and going on cruises with his devoted companion Karen Endres. Dave was preceded in death by his wife, Carol Christie Lemmen; his parents, Wayne and Carleen Lemmen. He is survived by his son, Scott (Debbie) Lemmen; daughter, Cara Lemmen; stepdaughter, Christy (John) Olson; brother, Thomas (Debra) Lemmen; sisters, Rhoda (Dan) Cronin and Lois DeHart; grandchildren, Tristan, Miranda, Isaac, Ethan, and Sofia; and numerous cousins, nieces, and nephews. A celebration of life will be held in the spring, the date and location are yet to be determined. In lieu of flowers please send any donations to Gift of Life Michigan.

The family of David Irving Lemmen created this Life Tributes page to make it easy to share your memories.