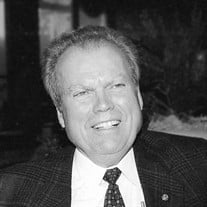 David T. Rowe, 86, of Traverse City, died July 16 at the Villa at Traverse Point after a battle with cancer. He was born in Flint, Michigan on August 4, 1929 to Thomas and Eva Juanita (“Nita”) Rowe. He graduated from Flint Technical High School in 1947 and went on to Michigan Technological University, earning a degree in Civil Engineering. He was a back-up fullback on the only undefeated football team at Michigan Tech in 1948. He married Senia Kinnunen, from Hancock, Michigan in 1951 and their marriage endured for 65 years. They lived on Lake Michigan near Northport, until moving to Glen Eagle in Traverse City in April. He was drafted right after graduating and spent his Army years at Fort Belvoir in Virginia doing design work. After a few years of working for Gould Engineering, in 1962 he started his own engineering and surveying firm in Flushing, Michigan (Rowe Engineering, Inc.) and that firm still operates in Flint under the name Rowe Professional Services. Dave guided the firm to become one of Michigan’s leading consulting firms. In 1992 he sold that firm and started a new company, Inland Seas Engineering, with his youngest daughter in Suttons Bay, Michigan. The firm later moved to Traverse City and also has an office in Flushing. He achieved registration in his field and was a licensed Professional Engineer, Professional Surveyor and Professional Community Planner and completed hundreds of engineering and surveying projects throughout Michigan. He was very involved in industry organizations. He served as President of the American Council of Engineering Companies Michigan Board of Directors, chairman of the national scholarship committee, was elected a Fellow of the National ACEC, and received the Felix A. Anderson award for enhancing the image of the profession. He also served as secretary of the Michigan Society of Professional Land Surveyors. He served on a national committee to develop Barrier Free Standards for Boating Access under the American Disabilities Act. Over the years, Dave mentored hundreds of engineers and surveyors. As an alumnus of Michigan Tech, he was a member of the President’s Club, served on the Executive Council of the Partnering with the Future Campaign, and was inducted into the Academy of Civil and Environmental Engineers. He was a Rotarian in Flint and in Suttons Bay, served on the Flushing School Board, was a member of the Elks Lodge, and became a 33rd Degree Mason. He enjoyed gardening and was known for his beautiful roses. He was adept at woodworking, and over the years designed two homes, a cottage and an office building, doing much of the construction himself. He leaves his wife, Senia, son Thomas of Traverse City, daughters Rebecca (Andrew) Smits of Traverse City and Carrie (John) Schlobohm of Flushing, and grandson Aaron Smits of Ann Arbor. His immediate family included sister, Ann (John) Simpson, deceased, brother, Michael (Loann), deceased, and brothers George Alan (Betty) in Charlevoix and John (Jean) in Manistee. A memorial service will be held on Wednesday, August 10, 2016 at 11 a.m., with visitation beginning at 10 a.m., at Central United Methodist Church in Traverse City. Pastor Dale Ostema will officiate. Memorial contributions may be made to the Michigan Tech Civil Engineering Department at Michigan Tech Fund, 1400 Townsend Drive, Houghton, MI 49931 or at www.mtu.edu/giving.

David T. Rowe, 86, of Traverse City, died July 16 at the Villa at Traverse Point after a battle with cancer. He was born in Flint, Michigan on August 4, 1929 to Thomas and Eva Juanita (&#8220;Nita&#8221;) Rowe. He graduated from Flint Technical... View Obituary & Service Information

The family of David T. Rowe created this Life Tributes page to make it easy to share your memories.