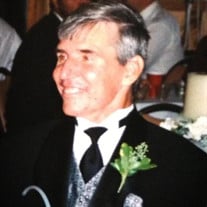 CEDAR – David Schopieray, age 63, of Cedar, passed away Saturday, November 12, 2016 at his home in the loving care of his family. David was born at Munson Hospital in Traverse City on May 9, 1953 to Patrick and Maxine (Stachnik) Schopieray. David attended Holy Rosary School until graduating from Glen Lake High School. Shortly after graduation, he married Deborah Gail Brice, and together they made their home on Bodus Road in Cedar, MI. David and Deborah were blessed with two children, Patrick and Shannon. David was by any measure a jack of all trades and worked at; Traverse City Iron Works, Cluff Well Drilling, Runge Farms, Sugar Loaf Mountain, Tri County Patrol, and also did construction, primarily roofing, until a car accident in Frankfort, MI on April 11, 1987 where he suffered injuries that left him being a quadriplegic. After a yearlong stay at the University of Michigan for treatment and rehabilitation, David returned home to begin a new chapter in his life with Deborah and his children. Through it all David maintained a positive attitude with a smile and grin each and everyday. David and Deborah maintained their home in Cedar, and purchased several homes in Cape Coral, and Fort Myers, FL through the years to make winters a little more bearable until the trip became too difficult. David, with a lot of help and technical support, continued to deer hunt, and managed to harvest several deer from his wheelchair. David especially enjoyed his home on Lake Leelanau and going for pontoon rides when the weather permitted. David enjoyed watching tennis, and later on Nascar, which became his passion, and would watch every race from practice up until the checkered flag. David also enjoyed going for rides, it didn’t matter where, as long as they ended at an ice cream shop. In spite of the adversity life placed on David’s shoulders, he was able to see his two children grow into upstanding adults as well as his grandchildren born, grow, and flourish. David is survived by the love of his life, and wife of 44 years, Deborah "Snug", his two children; Shannon (Chip) Rice, Patrick (Nichole) Schopieray, grandchildren; Andrew, Isabelle, Landon, Ana, and Chumlee his dachshund. Also surviving is David’s mother, Maxine, sisters; Patti (Cameron) Keim, and Tammy (Paul) Haywood, as well as numerous nieces and nephews. David is preceded in death by his grandparents and his father Patrick. A visitation for David will take place on Tuesday, November 15, 2016 at Holy Rosary Church, Cedar, from 4:00 pm – 7:00 pm with a rosary service taking place at 7:00 pm. Visitation will also take place on Wednesday, November 16, 2016 at Holy Rosary Church, from 10:00 am – 11:00 am with a Funeral Mass taking place at 11:00 am with Father. Donald Libby and Father. Kenneth Stachnik con-celebrating. Immediately following Mass, a graveside service will take place at Mount Calvary Cemetery. Following the graveside service on Wednesday, a luncheon will take place at Holy Rosary Church. David was a devout catholic and belonged to Holy Rosary Church in Cedar, MI. Despite adversities, David never wavered in his faith. Deborah and the family would like to express their gratitude to the many people that were part of David’s life and provided healthcare, some of their time, especially a story and a smile. He will be missed by his special friends and all those who knew him. The family asks that memorial contributions be directed to the Solon-Centerville Fire Department, 9588 S Cedar Road, Cedar, MI 49621. Please share a memory with the family by visiting www.reynolds-jonkhoff.com. The Reynolds-Jonkhoff Funeral Home and Cremation Services is serving the family.

CEDAR &#8211; David Schopieray, age 63, of Cedar, passed away Saturday, November 12, 2016 at his home in the loving care of his family. David was born at Munson Hospital in Traverse City on May 9, 1953 to Patrick and Maxine (Stachnik) Schopieray.... View Obituary & Service Information

The family of David Lynn Schopieray created this Life Tributes page to make it easy to share your memories.