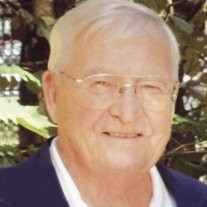 David Lee Space, 83 of Traverse City, died at Munson Hospice House on December 13, 2013. David was born on June 26, 1930 in Jackson, MI to Dallas and Georgia Space. David grew up in Ann Arbor. He met his wife, Barbara Layher when they were sixteen. They married on March 31, 1951. He graduated from Ann Arbor High School in 1948 and entered U of M that fall. David was always known for his athletics. He was an avid golfer from age 10. In high school he played golf, basketball, and football. At the U of M he was a varsity wrestler for three years. After graduating in 1952 with a bachelor degree in Business Administration. He and his family moved to Owosso, MI., where he went to work for Woodard Wrought Iron and Furniture. While there he learned to love Steelhead trout fishing. He taught the boys in the family and enjoyed many years of fishing with them and his many good friends. In 1987 David and Barbara moved to Traverse City, where David had purchased Bay Motor Products. He never quit golfing, fishing or working, until Jesus called. He was a devoted husband and father until death. Surviving David is his wife Barbara, son David (Diana) Space of Greensboro, NC, Thomas Space of Kalamazoo, Todd (Tammy) Space of Traverse City, Julie (Alan) Sorenson of Owosso and Stephen (Kathy) Space of Midland, and 11 grandchildren. He is preceded in death by his parents and sister Hariette, brothers Dallas and Durwood. A celebration of his life will be held for family and friends at Boone’s Long Lake Inn, in Traverse City on Saturday, January 4, 2014 from 2-5pm. Memorial contributions may be made to A.C. Paw or Cherryland Humane Society. His Dogs, Harry and Noah will miss him dearly. Please sign David’s online guestbook at www.reynolds-jonkhoff.com. The family is being served by the Reynolds-Jonkhoff Funeral Home in Traverse City, MI.

David Lee Space, 83 of Traverse City, died at Munson Hospice House on December 13, 2013. David was born on June 26, 1930 in Jackson, MI to Dallas and Georgia Space. David grew up in Ann Arbor. He met his wife, Barbara Layher when they... View Obituary & Service Information

The family of David Lee Space created this Life Tributes page to make it easy to share your memories.