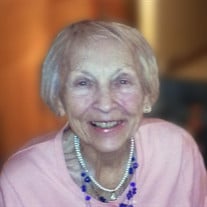 Forty-seven years ago, I was climbing the stairs at the University of Detroit to take an exam. Climbing down the stairs was a beautiful blonde with tears in her eyes. I asked her if I could help and thus began a lifelong love affair. She was going to drop the class and her goal of obtaining a Masters Degree. I told her I'd destroy the resignation note she had left on the prof's desk and would help her with the studying. I learned that she was caring for her two little daughters, was a teacher and had little time for studying. In brief, we both passed the class and we both received our Master's Degrees. I moved to Traverse City and begged her to join me. This was a very difficult thing for her since it meant leaving her parents, Anthony and Stephanie Dubeck, her brother and sister-in-law (Tony and Pat) and their four children – Michael, John, Peggy and Dan. It also meant leaving the parish where she had been the choir director and organist; it meant leaving her friends from U. of D. where she had once been home-coming queen. Thankfully she took a leap of faith, packed up her girls and moved to Traverse City. Del resumed her teaching career and immediately made friends. A year later she gave birth to Francis (Frank Jr.). We're so proud of our children, all three of whom are in “helping” professions – Paula (Ken) Smith; children Tiffani, Kendra and Tyler, grandchildren Jayla and Aiden. Lynne (Greg) Sommerville and her children, Joey, Chris and Mike; and Frank Jr. who is a prof at Delta Community College. In 1986, Del was named “Outstanding Teacher of the Year”. She had a sincere love of children and of teaching. She spent thirty-nine years teaching, principally in the fourth grade but also at the Junior High. She developed a college-level class in education and taught the class at Northwestern Michigan College for five years. Del was an accomplished pianist and had a beautiful voice. She also loved dancing but unfortunately my two left feet didn't jibe with her “twinkle-toes”. However she never gave up trying to acculturate me. And then, about five years ago, we noticed little things that we now understand were the onset of that cursed Alzheimer's! Only in the past year did the symptoms become somewhat debilitating. I'm just so grateful that we were able to keep her at home. We would often go shopping and Del would “recognize” women that she thought she knew. She'd walk up to them and compliment them on their looks or say something nice to them. Almost always the person she greeted would reciprocate, some even giving her a hug. And the children she'd meet! She'd always pay attention to them. For the last few months, we had a ritual: we would sit on the couch. I would hold her and she would relax. In short, Del was a warm, loving, intelligent and caring person who is going to be profoundly missed. I love you, Honey, your devoted husband Frank. A “goodbye” service will be held at Christ the King Church, 3801 Shore Rd., Williamsburg on Friday, December 5, 2014. At 10:00 a.m., we'll meet in the vestibule to chat about Del and at 11:00 Fr. Raymond Cotter will conduct the funeral service. After the service, we'll retire to the lower level of the Church for a luncheon. If anyone would like to leave a gift in Del's honor, it will be sent to the Alzheimer’s Foundation where they're searching for a cure. Please feel free to share your thoughts and memories with Del’s family at www.reynolds-jonkhoff.com. The family is being served by the Reynolds-Jonkhoff Funeral Home and Cremation Service.

Forty-seven years ago, I was climbing the stairs at the University of Detroit to take an exam. Climbing down the stairs was a beautiful blonde with tears in her eyes. I asked her if I could help and thus began a lifelong love affair. She was... View Obituary & Service Information

The family of Delphine Marie Kullman created this Life Tributes page to make it easy to share your memories.

Forty-seven years ago, I was climbing the stairs at the University...