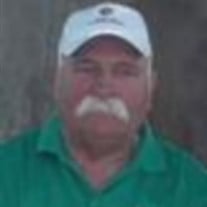 Dennis Albert Berglund (Denny), 80, of Traverse City, formerly of Levering, passed away on January 31, 2021. Denny was born in Rhinelander, Wisconsin to Irma (nee Chilson) and Roy Berglund with his older brother Donald and his twin; Dean. Denny spent his early years in Wild Rose, WI, where he attended Wild Rose High School as a member of the class of 1959 where his athleticism won him many awards. His twin brother Dean said of him, “He was one heck of a quarterback.” As a teen, he loved spending time on the football field, in the woods hunting, or near water fishing. He maintained a love of the outdoors and football throughout his life. Denny enlisted in the Coast Guard, where he earned The Good Conduct Medal. He married Linda Moore in 1963 and was honorably discharged in 1965. They settled in Northern Michigan and had three of their own beautiful daughters. Denny was a kind and dependable father, brother, grandfather, husband, and friend. The family was of the utmost importance to Denny and he certainly did not disappoint when it came to his wholehearted love for his extended family. He also loved the Green Bay Packers, which seemed only second to family. Denny was a lifelong Wisconsin Badger fan as well; he was always sporting Cardinal and White. Denny worked for Boyne Highlands for 36 years, keeping the golf course immaculate and the slopes safe until retiring in 2014. Denny is preceded in death by his parents Roy and Irma, his former wife of 23 years and mother of his daughters, Linda Moore Berglund. Denny is survived by his devoted wife of 30 years, Susan (nee Collins Emerick), his loving daughters Kelley (Tim) Cook of Cheybogan, Kimberley (John) Givens of Alanson, Kasey Munns of Cheboygan, stepchildren Steven (Kim) Collins of Bloomfield Hills and Elizabeth Collins-Williams (John) of Traverse City. Denny’s grandchildren brought him so much pride: Richard (Jessica) Cook, Milissa Cook, Megan Arnold, Bailey (Hanna) Givens, Zack Givens, Samantha Munns, and Sara Munns and Jack, Declan, Garrett and Kiely Williams, David Collins, and two great-grandchildren, Kylee Arnold and Thomas Pigott. Also surviving Denny are, his older brother Don (Juleen) and Denny’s twin Dean (Cheryl) Berglund; both of Wild Rose, WI. Denny leaves behind many nieces, nephews and cousins in Wild Rose and throughout. The family would like to thank the staff of the many Traverse City elder support programs that helped with the care of Denny and Susan when they relocated to the Traverse City area in 2016. The list includes; The Area on Aging, Northern Healthcare Management, Ritters Assisted Living, NPalliative Care, Heartland Hospice and all the front-line workers at Medilodge of GTC. In lieu of flowers, memorial contributions can be made to the Wild Rose High School Athletic Booster Club, Wild Rose Wisconsin. Per Denny’s request, no service will be held. However, the next time you have a drink, please raise your glass to Denny, a kinder, gentler man there has never been. Please feel free to share your thoughts and memories with Denny’s family at his tribute page at www.reynolds-jonkhoff.com. The family is being cared for by the Reynolds-Jonkhoff Funeral Home and Cremation Services.

The family of Dennis "Denny" A. Berglund created this Life Tributes page to make it easy to share your memories.