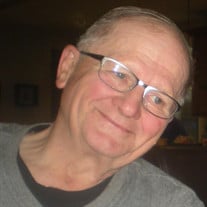 Dennis Lee Lyon passed away January 23, 2022. He was born in Traverse City, MI on March 30, 1946 to parents, Harry and Hilda (Sieffert) Lyon. He was the oldest of 3 siblings, growing up with his younger sister, Jan and brother, Rick. Denny began his education in the Courtade one-room schoolhouse, and graduated from TC Central HS in 1964. After graduation from Ferris State University, he dove into the family business, working with his dad at Lyon Construction Company. Denny’s carpentry skills served him and others well through the years as he built his family home, additions, and he assisted in renovations for friends, family, and those less fortunate through outreach projects in multiple states. On December 22, 1967, he married Linda M Button at Oak Park Congregational Church. Together they raised their three sons in their home on Washington Street. Denny’s career path led him to Consumers Energy Company, where he worked for nearly 30 years. He had currently been serving his community on the Northwest Consumers Federal Credit Union board. He was active in his church, Traverse Bay United Methodist Church, and over the years he led the youth group, sang in the choir, taught Sunday school and served on various committees. Denny also served the Boy Scouts of America for over 30 years. He was a Scoutmaster for Troop 32, member of the Order of the Arrow, was active in the Society of George, served on various district level committees, and was proud to earn his Wood Badge Award He loved to camp, hunt, and fish and especially enjoyed spending time with his family and friends at the hunting and fishing camps. Family camping was a special time in his life, enjoying short and long trips that took him around the Great Lakes, into Canada, and across the western United States. Denny so much enjoyed family time with his 3 sons, their spouses, and their families. Travel later in life focused on sharing in his grandkids’ lives and activities. He leaves behind his loving wife, Linda, three wonderful sons, Brett (Paula) of Nairobi, Kenya, Tim (Jennie) of Traverse City and Jonathan of Murray, Kentucky, and his seven grandchildren, Nico, Lucas, Leland, Nola, Marcos, Izzy, and Maxwell. It always brought a smile to his face to be with his grandchildren and hear about their lives. He also leaves behind his brother Rick (Diane), sister Jan (Walt), brother in law Jim (Marty), and sister in law Corinne, their families and many extended relatives. Preceding him in death were his parents, Harry and Hilda, sister in law Diane, brother in law Bob, nephew, Patrick, and nieces Brenda and Samantha. A visitation and celebration of life service is planned in the garden at Reynolds Jonkhoff Funeral Home at 10 AM and 11 AM, respectively, on Friday July 15, 2022. In lieu of flowers, the family suggests that you might honor Denny’s life with a donation to the local Boy Scouts of America, 1400 Business Park Dr, Traverse City, MI 49684-8741 or the Boardman River Clean Sweep, @Norman Fred, 10422 Peninsula Dr, Traverse City, MI 49686.

Dennis Lee Lyon passed away January 23, 2022. He was born in Traverse City, MI on March 30, 1946 to parents, Harry and Hilda (Sieffert) Lyon. He was the oldest of 3 siblings, growing up with his younger sister, Jan and brother, Rick. Denny began... View Obituary & Service Information

The family of Dennis Lee Lyon created this Life Tributes page to make it easy to share your memories.