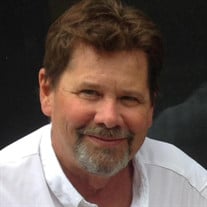 Dennis passed away peacefully in his sleep on Wednesday evening, with his faithful dog Teddy nestled by his side. He was happy and content having just spent the weekend with his best friends, Dave Beall and Bill Giorgio. The “Terrible Trio” had a friendship like no other, going back well over 50 years. Dennis was born to Violette (Skip) and Donald (Don) Tuck on March 26, 1959 and was raised in Novi, Michigan. He graduated from Novi High School in 1977 and earned his bachelor’s degree in Geology at Northern Michigan University. In 1985, Dennis married his high school sweetheart, Jeannette Crellin and together they began their life in Traverse City. They had two sons, Andrew and Jonathan, whom Dennis was so incredibly proud of. Bragging didn’t come easy to Dennis unless it was about his sons. They loved spending time with him and will miss his sense of humor. He worked at Kadlec Associates for 20 years before buying the business with his partner in 2004. He remained there until 2021 when he entered into hospice at home due to an ailing heart. Outside his family, Dennis enjoyed fishing more than anything else on earth, especially for muskies. His boat was aptly named Water Wolf. He also loved hunting with his uncles every year at deer camp, rehashing old stories, creating new ones and playing guitars. In addition to fishing and hunting he also enjoyed competitive gun matches, bowling, and snowmobiling. On windy days you could often find him tinkering with something in his pole barn. He was a quiet and humble man who had a heart of gold. He often helped others who were in need, never wanting to draw any attention upon himself for doing so. Dennis was preceded in death by his father, Donald Tuck and will be greatly missed by his wife, Jeannette, sons Andrew and Jonathan, mother, Violette (Skip), sister Lori (Jeff) Weaver as well many siblings-in-law and nieces and nephews, all of whom he loved as dear friends as well as family. A memorial is being planned for June 2022. Please feel free to share your thoughts and memories with Dennis’ family at his tribute page at www.reynolds-jonkhoff.com. The family is being cared for by the Reynolds-Jonkhoff Funeral Home and Cremation Services.

Dennis passed away peacefully in his sleep on Wednesday evening, with his faithful dog Teddy nestled by his side. He was happy and content having just spent the weekend with his best friends, Dave Beall and Bill Giorgio. The &#8220;Terrible... View Obituary & Service Information

The family of Dennis Edward Tuck created this Life Tributes page to make it easy to share your memories.

Dennis passed away peacefully in his sleep on Wednesday evening,...