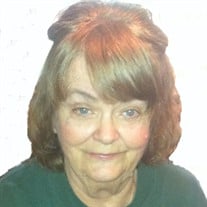 GRAWN - Diana Nell Bullock, 64, of Grawn, passed away unexpectedly Monday, Aug. 4, 2014 at the Grand Traverse Pavilions. Diana was born in Durango, Colo. on July 5, 1950, the daughter of Roberta Nell (Davies) and John Denzell Paschall. She married Lorn Rockwell Bullock on Aug. 8, 1992 in Farmington, N.M. in the bowling alley where they had met and Diana worked. They moved to this area in 1992. Diana was a great bowler and was an instructor for JBA for children. She enjoyed reading and crocheting, but really enjoyed being Nana to her grandchildren and spending time with them. She is survived by her husband Lorn; her children, Sherry (Jason) Ekins of Traverse City, Dennis (Michele) Groblebe of Farmington, N.M., Paul Oliver (Isabele) North of Kingsley, Angela Dawn (Michael) Moore of Carthage, Texas; her grandchildren, Jaden Ekins, Dylan Ekins, Devan Groblebe, Connor Groblebe, Brakell North, Aaron Franks and Sarah Franks; her brothers, Mike (Cynthia) Paschall of Aztec, N.M., Keith Paschall of Albuquerque, N.M., David (Robin) Paschall of Phoenix, Ariz.; her sisters-in-law, Candie (Alex) Trevino of Owosso, Penny Eaton of Knoxville, Tenn., Malinda (Michael) Davenport of Strawberry Plains, Tenn., Laura Sproles of Slaton, Texas; her father and mother-in-law, Lorn and Marilyn Bullock of Hessel, Janet Silvers of St. Johns, Mich. and a step-brother, Cam Bullock of Freeland and many nieces and nephews. She was preceded in death by her parents. A memorial service to celebrate Diana's life will take place on Aug. 8, 2014 at 1:00 PM at the Grace MacDonald Park. Memorial contributions may be directed to the family. Please share memories and thoughts with the family by way of the online guest book at www.reynolds-jonkhoff.com. The family is being served by Reynolds-Jonkhoff Funeral Home and Cremation Services.

The family of Diana Nell Bullock created this Life Tributes page to make it easy to share your memories.