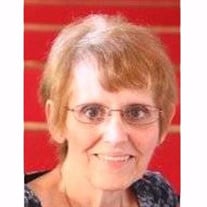 TRAVERSE CITY - Diane Mary Bailey, 62, of Traverse City died Monday May 4, 2015. She left her earthly home for her heavenly home with her loving husband and family by her side. She is now doing her version of "Dancing with the Stars." Diane was born in Pontiac, MI, on Sunday June 29, 1952, to the late Ruth Anne (Zisler) and Clayton Charles Smith. She is survived by her husband, Vern; her children: Angela (Sean) Stockfisch, Brandi “Brandalyn” Morris, Dominic (Alicia) Flansburg and Lee (Jessica) Bailey, all of Traverse City; her stepchildren: Joe Bailey of Newberry, Laura Korby of Redford Twp., Adriane "Rainey Jane Noteware” of Alaska and 15 grandchildren: Patrick (Katrina) McVay, Bob McVay; Spencer, Nathan, Jorie, Ellery Stockfisch; Brody, Collin, Alexa Flansburg; Matthew Gorsuch; Jezlynn, Grace, Lila, Michael and Ashley Bailey. Also surviving are sister, Ruth Ann Stibitz and brother Clayton "Sonny" (Deb) Smith, both of Traverse City and sister-in-law Karen Lyon of Buckley and several very loved nieces and nephews in Traverse City and South Carolina, as well as multiple cousins, including loving cousin Bev Wenger. Diane was preceded in death by her parents, twin granddaughters, Mackennah and Mackenzie Bailey; her adored sisters, Dorothy Lyon and Beverly Massie, brothers-in-law, Henry and Lanny Lyon, sister-in-law, Bonnie Lyon and her parents-in-laws, Edna and Lloyd Lyon and Vernon Bailey, Sr. The most important things in Diane’s life were her steadfast and unbreakable faith in Jesus as well as her husband, Vern "Birdie Bailey." Her faith kept her going through two near-fatal surgeries and 16 years of pain and physical struggle. Romans 8:28 was her favorite Bible verse; “And we know that for those who love God all things work together for good, for those who are called according to his purpose.” One of Diane’s favorite quotes was “Faith isn't faith until it is all you’re holding onto.” And she did hold on! After her faith, Diane’s family “The Bailey Bunch” was her greatest love. Nothing gave her greater joy than spending time with her grandchildren. Her family describes her as generous (her door was always open to anyone in need), loyal, funny (sarcasm anyone?), stubborn, and a peacemaker. She greatly enjoyed decorating her home for the holidays and celebrations. She could always be counted on to share her wisdom with her family whether they wanted it or not! “Because I’m the Mom” was heard frequently. She even tolerated the occasional food fight with good humor. She was a very creative person and that showed itself in her love of crafts and gardening. She particularly enjoyed crocheting and each grandchild has a blanket specially crafted by Grandma. There are even extra blankets for future great-grandbabies. Diane was a smart lady and enjoyed reading and crossword puzzles. Summer lovin’ was her attitude and she enjoyed being out in her yard planting flowers and watching the birds and other critters who decided to visit. Strays were always fed. Diane’s loving heart will always be remembered by friends and family. The family wishes to thank Heartland Hospice for their incredible care of Diane and her family. Amy, in particular, was a special blessing to Diane. She was not only her caregiver but her very good friend. Visitation will take place at Reynolds-Jonkoff Funeral Home on Monday May 11, 2015 at 2:00 p.m. with a memorial service directly following at 3:00 p.m. A potluck will be held at Living Hope Church after the service. Memorial contributions may be directed to the family to offset expenses, Heartland Hospice or the American Cancer Society. Please share memories with the family at www.reynolds-jonkhoff.com The family is being served by Reynolds-Jonkhoff Funeral Home and Cremation Services.

TRAVERSE CITY - Diane Mary Bailey, 62, of Traverse City died Monday May 4, 2015. She left her earthly home for her heavenly home with her loving husband and family by her side. She is now doing her version of "Dancing with the Stars." Diane... View Obituary & Service Information

The family of Diane Mary Bailey created this Life Tributes page to make it easy to share your memories.