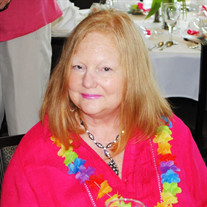 Diane Louise Nowak was a caring wife, mother, grandmother, sister, and friend. She returned home to the Lord on October 27, 2020 at the age of 65 after a courageous battle with Parkinson’s Disease, surrounded by loved ones who will continue to honor her legacy by living their lives to the fullest. We celebrate her overwhelming joy as she is now reunited with her son, Mark, after 23 years. Diane was born to William and Jane Brockway on March 28, 1955 in St. Louis, Missouri. After graduating from high school, Diane chased her dreams of becoming an Administrative Officer in the U.S. Army. It was in St. Louis where Diane met her husband, William, and they wed on June 16, 1978. She went on to receive her bachelor’s degree in Psychology and Business from Grand Valley State University. Diane will forever be known to many as a savvy business woman, with a knack for financial management, negotiation skills, and marketing expertise. Using these skills, she took on a pivotal role in opening William’s medical practice in Traverse City, Michigan in 1983, and continued to serve as office manager until 2018. Yet, her greatest accomplishment was the 3 children her and William had together: Steven, Mark, and Anna. Diane will forever be remembered for the depth of her love for her family. Her devotion to her children, their spouses and her grandchildren was beyond measure. She would proudly boast her children’s and grandchildren’s accomplishments to everyone she encountered. The best years of her life were being a mother raising her loving children, driving them to endless practices and games, talking about their latest crushes, going back-to-school shopping, sending weekly care packages to college, playing board games, and making memories on many wonderful vacations. She also experienced immense joy in hearing the laughter of her four grandchildren playing together and teaching them new games on her iPad. Diane was a friend to many throughout the community and maintained those relationships over several years. Her beautiful hair, friendly smile, and warm personality made her so approachable that she’d make a new friend everywhere she went and would be the first to strike up a conversation with a stranger, in hopes of brightening their day. In her role as a soccer, hockey, volleyball, basketball, baseball, softball, and football mom, Diane developed many lifelong friendships from her children’s sports and will forever be remembered by many as the “team mom.” Diane leaves behind a legacy of laughter and good times to be remembered and shared by the people she touched. She will especially be remembered for her Burger King hockey red Suburban, her volleyball tournament crockpot meals, her pink lipstick and watermelon balls at baseball games, carpooling teams to tournaments, sitting on the sidelines in the rain, never missing an away game, and being the photographer and scrapbooker for all her children’s sports teams. She also had a special love for watching the NBA and would often surprise us in her knowledge of players and Detroit Pistons team stats. In addition to having a keen interest in sports, penny slot machines, and monitoring the stock market, Diane was an avid reader, writer, and rhyme composer. She took great joy in writing poetry and helping her children with schoolwork, term papers, and even job interview preparation. She put her entire being into raising her children, asking nothing in return. She was the strength and spirit of her family, teaching us all that life is not always fair, but God is always faithful. Most importantly, she taught us that in a world where you can be anything, be kind. “People will forget what you said, people will forget what you did, but people will never forget how you made them feel.” – Maya Angelou She is survived by her best friend and devoted husband of 42 years, William Nowak; her loving children Steven (Christina) Nowak of Traverse City, MI; and Anna (Joseph) Lazar of Birmingham, MI.; four grandchildren, Makenna, Mark, Juliana, and Emilia; two sisters, Carol McDonald of St. Louis, MO; and Linda Moretti of Huntsville, AL; and several nieces and nephews. She is preceded in death by her son, Mark; and parents, William and Jane. Private family services have been held. In lieu of flowers, the family prefers donations to be made in Diane’s honor to the Michigan Parkinson Foundation. Kindly share thoughts and memories with Diane’s family at www.reynolds-jonkhoff.com.

Diane Louise Nowak was a caring wife, mother, grandmother, sister, and friend. She returned home to the Lord on October 27, 2020 at the age of 65 after a courageous battle with Parkinson&#8217;s Disease, surrounded by loved ones who will continue... View Obituary & Service Information

The family of Diane Louise Nowak created this Life Tributes page to make it easy to share your memories.