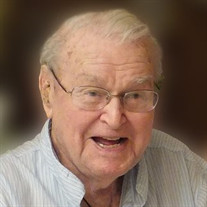 Dominic William Dunn, 100, of Traverse City, passed away on Sept. 10, 2014. Dominic was born in Traverse City at 624 State St. November 17, 1913. As a child, Dominic was raised by his grandparents, Valentine and Isabel Dunn, in Traverse City. Later, he played on the Pacific Coast in Seattle, surviving the Spanish flu, and roamed the mountains of Idaho for two years on his Indian-trained horse before returning to Traverse City. At fifteen he postponed high school to raise his infant sister Pat and care for his invalid mother. He earned a living as a weekend cherry grower in Traverse City (his farm is now the Silver Lake Recreation Area Park) and a foreman at General Motors Diesel in Grand Rapids, flying between the two. When he retired, Dominic sold his plane and became a sailor aboard his sailboat, The Restless. He traveled from the East coast of the U.S. to Hawaii in the West. He saw the world-Ireland, the Middle East, Japan, China, Canada, Mexico, Ecuador, Chile, Australia, Uruguay, Argentina and Bolivia. Dominic is survived by three children; daughter, Mary (Mike); sons, Larry (Valentina and Gloria), Joel (Janice); twelve grandchildren, fifteen great grandchildren, and one great-great grandchild; and his sister Pat (Gene) Bowers. After 100 years, he joins family and close friends; wife, Veatrice (Lossing) Dunn; uncle, Alec Rennie; cousin, Bill McGarry; friends, Leon Purchase, Les McCain, Ray Ducharme, and Tony Verolme. He will be missed. Arrangements for the family have been entrusted to Reynolds-Jonkhoff Funeral Home and Cremation Services.

The family of Dominick William Dunn created this Life Tributes page to make it easy to share your memories.

Dominic William Dunn, 100, of Traverse City, passed away on Sept....