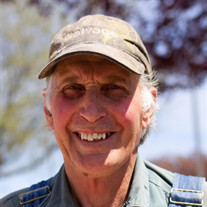 Donald Lloyd Bugai, 76, of Cedar, died November 17, 2021. He joined God’s open arms while doing what he loved; heading to a cattle sale with his farming friends...complete with his turkey sandwich, Pepsi-Cola, and Little Debbie cakes. Born December 9, 1944, at Munson Medical Center, in Traverse City, Michigan, to Helen (Kroupa) and Julius Bugai Sr. Donald grew up in Cedar, Michigan, on the very farm he owned and operated. He knew he wanted to be a farmer and began driving tractors on his family’s farm at the young age of five. Throughout his childhood, he was an active member of both the FFA and the Elmwood Lads & Lassies 4-H Club, where he proudly displayed his dairy cattle. Donald and his wife Susann (Vask), were married March 1, 1974. This year, they happily celebrated 47 years of marriage. They went on to build a wonderful life and raise their sons in Cedar, Michigan. As a dedicated lifelong dairy and cherry farmer, Donald was an extremely hard working man and had a soft spot for animals. Each day his mornings and evenings were busy milking and tending to cattle, with remaining daylight hours spent in the farm fields and orchards. In rare moments when Donald was able to sneak away from the farm, he enjoyed time hunting with the guys, which included several trips to Montana. Donald was often found wearing his classic green work shirt, denim bib overalls, 5-buckle rubber boots, and a great big smile, which radiated kindness. In recent years, Donald has shared his love for cattle with grandson, Gunner and enjoyed car rides and tossing a ball with his dog, Roscoe. Donald is survived by wife Susann (Vask); his sons, Robert (Cathleen) Bugai and Scott (Stephanie) Bugai; grandchildren, Gunner, Grace, Brody, and Baya; his sisters, Carolyn (Eugene) Lautner, Nancy Miles, and Linda (Louie) Walter. He is preceded in death by his parents, Julius Sr. and Helen Bugai; his older brother, Julius Bugai Jr.; and many farm animals throughout his life. A Celebration of Life at Bugai Farm is planned for spring 2022. Condolences and memorial contributions can be made to the Donald L. Bugai Memorial Fund, to support future youth in agriculture. Now these three remain: faith, hope and love. But the greatest of these is love. 1 Corinthians 13:13 Don and his family are being cared for by Reynolds Jonkhoff Funeral Home and Cremation Services North.

Donald Lloyd Bugai, 76, of Cedar, died November 17, 2021. He joined God&#8217;s open arms while doing what he loved; heading to a cattle sale with his farming friends...complete with his turkey sandwich, Pepsi-Cola, and Little Debbie cakes. Born... View Obituary & Service Information

The family of Donald Lloyd Bugai created this Life Tributes page to make it easy to share your memories.