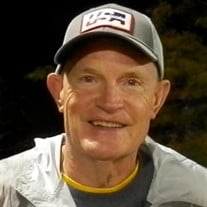 Donald Leo Korty, 76, of Traverse City, passed to his heavenly home on Saturday, January 8, 2022 at his home. Don was born in Manchester, New Hampshire on October 9, 1945, to Raymond and Agnes Korty. He grew up in northern New Jersey and at the age of 16 moved to Lafayette, Indiana. He received a Bachelor’s of Science from Purdue University and an MBA from University of Michigan. He was employed by the Buick and Powertrain divisions of G.M. and with his wife Mary Kay, retired in 1997. During retirement they spent summers in Traverse City, Michigan and winter months first in North Carolina, then in Georgia, and finally in Alabama. His family brought him great joy and he loved hearing about their and the grandchildren’s activities including sports! U of M football and basketball brought him many hours of enjoyment through the years. Don was active as a volunteer for AARP Tax Aide for over 20 years. He enjoyed assisting at any running events, including the Special Olympics. As a member of the Kiwanis Club of Traverse City he volunteered on various projects and especially loved the Flag Project. He was a passionate runner and greatly enjoyed the Traverse City Track Club where he was a member of their race team. He was preceded in death by his parents, Raymond Korty and Agnes Vaughan Korty. He is survived by his wife, Mary Kay; his children Sheila and Jim McFall, Swartz Creek, Michigan; Michael and Raquel Korty, Madison Alabama; Kristy and Brownell Kennedy, West Lafayette, Indiana; Rob and Ramona Cotton, Davison, Michigan; and Christopher and Barbie Cotton, Grafton, Wisconsin. Also, grandchildren: Jamie and Kenny Bell, Katrina Fargo, Krystal McFall; Isabel and Matthew Korty; Haley Taylor and Will and Sienna Kennedy; Andrew and Adam Cotton; and Reagan, Rebekah, Remy, Ruth, and Reed Cotton. He is also survived by his brothers and families: Lou (Jack) Korty, David and Kay Korty, Paul and Teri Korty; many well-loved nieces, nephews, extended family, and friends. Don’s faith and family were first in his heart, followed by his love of running and high school and college sports. He will be greatly missed yet we know he is with his Lord and Savior in a miraculous place. A memorial service honoring Don will take place at 3:00 p.m., with visitation starting at 2:00 p.m., on Saturday, January 15, 2022 at Harvest Bible Chapel Traverse City, 1669 S. Garfield Ave, Traverse City, MI 49686. The family is requesting that in lieu of flowers, memorial contributions could be sent to Harvest Bible Chapel, Traverse City, or Hospice of Michigan. Please feel free to share your thoughts and memories with Don’s family at his tribute page at www.reynolds-jonkhoff.com.

Donald Leo Korty, 76, of Traverse City, passed to his heavenly home on Saturday, January 8, 2022 at his home. Don was born in Manchester, New Hampshire on October 9, 1945, to Raymond and Agnes Korty. He grew up in northern New Jersey and... View Obituary & Service Information

The family of Donald "Don" Leo Korty created this Life Tributes page to make it easy to share your memories.

Donald Leo Korty, 76, of Traverse City, passed to his heavenly...