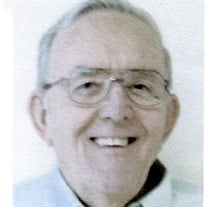 Don Reynolds, 84, of Traverse City, died Aug. 12, 2019 at his home. Don was born Nov. 22, 1934 in Robinson, Illinois, to the late Raymond C. and Erna Mae (Williams) Reynolds. Don graduated from Benjamin Bosse High School in 1952 and then attended Purdue University for two years. He served with the U.S. Army, working in the Army Security Agency stations at Fort Brag, North Carolina during the Korean War. Don married the former Harolyn Lee Brown on her birthday, Easter Sunday in 1955 at Bethany Christian Church (Disciples of Christ). Don and his family lived in Burdickville on Glen Lake for 30 years where they owned and operated rental cottages. He was well-known and respected in the area as the local insurance agent for DeVette and Ford Insurance in Glen Arbor. Don volunteered with the Glen Arbor Fire Department from 1980 to 1994, was a member of the DeMolay Masonic Lodge, Hadie Shrine Temple and Central United Methodist Church. Don was adventurous and he and Harolyn traveled all over including a visit to China. They also enjoyed volunteering at the Bijou and State Theatres, as well as the City Opera House. Don was preceded in death by his parents; and sister, Trilla Griffith. Don is survived by his wife, Harolyn; sons, Michael S., of Homestead, Florida, David M. (Rebecca), of Kalamazoo; daughter, Barbara C. (Mark) Lund, of Maple City; and grandchildren, Christine, Mallory and Allen Lund. A memorial service will be held for friends and family on Aug. 19, 2019 at 2 p.m., with visitation beginning at 1 p.m. in the chapel at Central United Methodist Church. Memorial contributions may be directed to the Cherryland Humane Society. Please visit www.reynoldsjonkhoff.com to share your memories and condolences with the family. The family is being cared for by Reynolds Jonkhoff Funeral Home and Cremation Services

The family of Donald "Don" Ray Reynolds created this Life Tributes page to make it easy to share your memories.