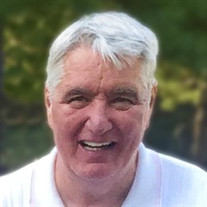 Donald K. Gullekson, “Big D”, 66, passed away March 23, 2018, after a brief but courageous battle with brain cancer at the Munson Hospice House with his family by his side. On May 15, 1951, Don entered this world into the loving arms of his late mother Jean (Butzin) and father Kay Gullekson, in Dearborn, MI. Don will always be known for excelling in athletics, as he was a natural athlete and coach who shared his gift with others. He played basketball, baseball, hockey, and graduated from Plymouth High School, then attended Huron College in South Dakota on a scholarship for both baseball and basketball. Here is where he met his wife of 43 years, Linda (Jost) and moved back to Michigan. For many years as an extension to his love for sports, he had a passion to play competitive travel softball in many leagues and state tournaments as well as recreational basketball. Two of the most prominent teams that he was a part of were Vegas Ranch (National Champions) from Lake City and Third Coast from Manistee. “On the court and field, Don was competitive, but off the court and field, he made you feel like the most important person in the room.” Sports to Don were number two by a long stretch in comparison for the love he had for his family. He always put his family first above anything else. He retained the best husband award until the end with Linda, always driving distances to find chicken noodle soup when she wasn’t well, taking her wherever she may need to go, and truly being by her side in sickness and in health. He wanted to be with his grandchildren (Griffin, Natalie, and Madison) every moment that he could taking them to water parks, the movies, playgrounds, Incredible Mo’s, and great grandpa Kay's house. He was a loving and fun grandfather who will be missed sorely by his grandchildren. Big D instilled many gifts to his family and a large part was him sharing his love of sports with his children. He was the Varsity Basketball Coach for the Mesick Bulldogs from 1992-1997 and a co-coach with his son for JV boys from 2004-2014 at Morley Stanwood. The last two years he took on the responsibilities of being a solo head coach. He was actively involved in any athletic excitement he could find, but never once missed a chance to watch his children play their sports to support them regardless of the distance or driving conditions. He was literally their biggest supporter and fan. Don was a successful salesman for Kraft Foods for over 29 years as he had a knack for being able to build incredible long lasting relationships. He was a member of the Faith Lutheran Church in Mesick, enjoyed golfing, fishing, BINGO, snowmobiling and working on his lawn. Big D was also an avid deer hunter in the Mesick hills near their beloved homestead of more than 20 years overlooking the Manistee River, never missing a season. Big D is best described by all who knew him as; loving, generous, passionate, dedicated, genuine, big hearted, courageous, selfless, inspirational, humble, hard worker, stubborn and FUN! Big D is survived and missed dearly by his wife Linda, his children; Jeff, Kim (Jason) Jancek and Lindsey, grandchildren; Griffin and Natalie Gullekson and Logan and Madison Jancek, father Kay, brother Doug (Amy) Gullekson, brother-in-law Jon Lash and aunts; Judy (Paul) Marshall and Mandy Gauld and many cousins, nieces, nephews and extended family. He is preceded in death by his mother Jean (Butzin) Gullekson, his sister Diane Lash, and Uncle Pat Gauld. A visitation will take place Friday March 30, 2018 from 4-7pm with open sharing at 6pm at the Reynolds-Jonkhoff Funeral Home; 305 Sixth Street, Traverse City, MI 49684. A funeral service will take place Saturday March 31, 2018 at 11:00am with visitation one hour prior also at the funeral home. A private burial will take place at a later date. Please visit www.reynolds-jonkhoff.com to share your memories and condolences with Big D’s family. In lieu of flowers, the family asks all donations be made to the Don Gullekson Memorial GoFundMe page which will go towards a scholarship or athletic sponsorship in his honor. The family is being cared for and served by the Reynolds-Jonkhoff Funeral Home.

The family of Donald 'Big D' Gullekson created this Life Tributes page to make it easy to share your memories.