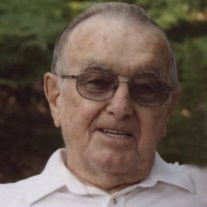 Interlochen - Donald Dean Hanes, 86, of Interlochen, died Thursday, February 21, 2013, at Munson Medical Center. Don was born on April 10, 1926 in Grant Twp. to the late Harry M. and Thelma (Decker) Hanes. On August 22, 1948, Don married Alice M. Harvey in Grant Twp. Don retired from Builders Plumbing Supply Co after 30 years of dedicated service. He was the Interlochen Township Constable for several years and a former boy scout leader in his younger years. Don was one of the founding members of the Volunteer Fire Department in Green Lake Township. He served as Chief for 16 years, and as a volunteer for 23 years. Above all else, Don enjoyed spending time with his family. He was also a devout follower of the Lord. Most recently he was active with the Fife Lake Baptist Church. In his spare time he enjoyed being outdoors, hunting, fishing, and gardening in his flower garden. He also liked spending time with his dog Lacy and bird watching. Don is survived by his wife of 64 years, Alice, daughters Linda (Rod) Donaldson of Kewadin, and Cheryl (Dick) Stricker of Traverse City, grandsons Jeremy (Michael Ann) Ball of Central Lake, Kevin (Charlotte) Ball of Elk Rapids, Ryan (Mandy) Nickerson of Traverse City, five great grandchildren, and sister Marilyn(Robert) Leckrone of Copemish and many nieces and nephews. Don was preceded in death by his parents and brothers Clinton and Billy. Visitation for family and friends will be held on Sunday, February 24, 2013 from 2 - 4 pm at the Reynolds Jonkhoff Funeral Home. The funeral will be held at 2:00 pm on Monday, February 25, 2013 also at the funeral home. Interment will take place at Grand Traverse Memorial Gardens. Memorial contributions in memory of Don may be directed to Munson Hospice or Fife Lake Baptist Church.

The family of Donald Hanes created this Life Tributes page to make it easy to share your memories.