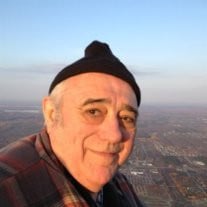 Traverse City-Donald Eugene "Don" Izatt, 73, of Lake Ann, died Sunday afternoon, March 10, 2013, at Munson Medical Center. Born November 24, 1939, in Taylorville, IL, he was the son of the late Martin and Izola (Tappero) Izatt. Up until Don’s short battle with cancer, he was employed as a flooring salesman with Home Depot for 15 years. Prior to Home Depot he owned and operated Izatt Oilfield Services and Mar-A-Lee Supply. Don enjoyed fishing, cooking and spending quality time with his family, especially his grandchildren. He is survived by his sons, Keith (Helen Luce) Izatt and their sons, Gabe and Noah, of Wausau, WI and Robert "Rob" (Tracy) Izatt and their daughters, Olivia, Elleana and Sophia, of Traverse City. In addition to his parents, he was also preceded in death by his brothers, Francy (infant) and Thomas. A Memorial Service will be held at Traverse City West Side Community Church on Thursday, March 28, 2013, at 11:00 A.M. Pastor John Clark will officiate. Cremation has taken place. In remembrance of Don, memorial contributions may be directed to West Side Community Church. Envelopes may be obtained at the church. Kindly share your memories with the family on their online guest book at www.reynolds-jonkhoff.com Arrangements were made with the Reynolds-Jonkhoff Funeral Home and Cremation Services.

The family of Donald Eugene Izatt created this Life Tributes page to make it easy to share your memories.