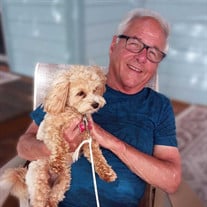 Donald R. (Don) Livingston of Traverse City passed away Tuesday, August 25, at Munson Medical Center with his loving family at his side after suffering a brain aneurysm. He was 81. Don was born in Flint on June 30, 1939 to his wonderful parents Jack and Pearl (Methner) Livingston. He built a successful career with AAA Michigan that spanned 38 years, starting at its headquarters in Southfield. He transferred to the AAA office in Traverse City in 1973, and in 1987 moved to Gaylord where he launched and grew his own AAA agency over the next 15 years. Throughout his life Don enjoyed creating special experiences for those around him. His daughters will always cherish the memories of their family vacations which included skiing, camping, hiking and other destinations including Disney World. He enjoyed the outdoors and relaxed enjoying smooth jazz. Don married Jean O’Brien on December 7, 1985. They worked side by side at Don’s insurance agency in Gaylord until his retirement in 2002. They returned to Traverse City and built a home on the Old Mission Peninsula. Don’s selflessness and constant drive to help others led him to a volunteer position at Munson Medical Center. His strong work ethic and excellent people skills led to a second career in the health care sector, where he worked for the next 10 years as a nurse’s assistant in Munson’s emergency room. His compassion and calm demeanor gave comfort and peace to scores of patients and their families dealing with the stress of an emergency room. The family is grateful for the support and kindness of his Munson family, including the ER workers who visited and the D5 staff who kept him comfortable in his final hours. Don was preceded in death by his parents, father-in-law Marvin O’Brien, brother-in-law Alan O’Brien, grandchildren Ryan and Hunter, and his black toy poodle Kadie. He is survived by his wife Jean; sister Linda Kukla, her husband Stan and their children Brian and Kristi; daughter Kelly Sarns (Sam) and her children Nichole and James Hartley; daughter Camie Basoral and her daughter Jahle and son Cody Bendickson; daughter Jody Barton and her daughter Brianna; mother-in-law Arlene O’Brien; brothers-in-law Leonard O’Brien (Margo); Robert (Laurie); Gus; Dale (Tracy); Bill (Laura); several nieces and nephews; many special friends, and his maltipoo Ladie. Friends of Don and the family are invited to celebrate his life with visitation on Sunday, August 30, from 6 - 8 p.m. at the Gardens at Reynolds Jonkhoff Funeral Home, and on Monday, August 31 from 9:30 - 11 a.m. at the funeral home. A Celebration of Life will follow at 11 a.m. at the funeral home, and he will be interred at Memorial Gardens. In lieu of flowers, the family invites memorials to be directed to Hospice of Michigan and the Botanic Garden at Historic Barns Park. Don and his family are being cared for by the Reynolds Jonkhoff Funeral Home.

Donald R. (Don) Livingston of Traverse City passed away Tuesday, August 25, at Munson Medical Center with his loving family at his side after suffering a brain aneurysm. He was 81. Don was born in Flint on June 30, 1939 to his wonderful parents... View Obituary & Service Information

The family of Donald "Don" Livingston created this Life Tributes page to make it easy to share your memories.