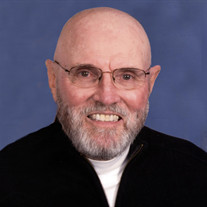 Donald Barrett Lord, 79, of Traverse City, Michigan, and The Villages, FL passed away peacefully on November 24, 2019. With his wife, children and grandchildren surrounding him in his final days, Don remained the strong and honorable example he had been all of his life. Don was born in Saginaw, MI on April 26, 1940 to Frank C. and Gertrude (Barrett) Lord. He graduated from Arthur Hill High School in 1958 having lettered in tennis and then Central Michigan University in 1963 with a degree in secondary education. Don was married to Wanda Harris in 1964 marking the beginning of their 56 year union. Earning his masters from Michigan State University in 1974, he began his passion for his beloved Spartans. Don was an educator at Bridgeport-Spaulding High School for 33 years (1963-1995) and turned his love of athletics into a 50 year career of officiating football, basketball, baseball and volleyball for the Michigan High School Athletic Association. His greatest love was sharing time and his many interests with his family and friends. Don was an avid golfer (with 4 hole-in-ones) throughout his life and played basketball and softball well into adulthood. Watching and attending Michigan State football and basketball games was one of his greatest pleasures. Whether sharing his love of sports with his grandson Jack, or attending the musical performances of his granddaughters Kate and Libby, Don was active in their interests and always present at the events, games and performances of his children and grandchildren. Don was innately curious and an intent observer of people and life. His curiosity was captured by his love of documentaries, the study of paper maps and atlases, knowledge and study of sports and teams and his voracious reading of newspapers. His curiosity about the world and sincere interest in others manifested in his detailed questions about the lives of the people around him and his ability to get to know just about anyone. Don also loved the simple pleasures of inspirational quotes, parades, euchre, an occasional margarita and the Florida sunshine. Don is survived by his wife Wanda, daughter, Kristina (John) Schnepf, son, Steven Allan Lord, granddaughters, Kate and Libby Schnepf, grandson, Jack Barrett Lord, sister-in-law, Kay (Robert) Lord Hoffman, niece, Lynn (Mike) Schick and nephews, Mike (Kathy) Pratt and Robert J. Lord. Don is preceded in death by his father and mother, sister, Janet (Ted) Pratt, twin brothers, Robert Lord and Bruce Lord. The family would like to thank the Webber Heart Center at Munson Medical Center, Traverse City, MI for the compassionate, expert care Don received. Especially, Dr. Bobby Kong, Dr. Krcmarik, Dr. Barraza as well as nurses, Heidi and Nicole. A memorial service honoring Don will take place at 3:00 p.m., with visitation starting at 2:00 p.m., on Sunday, December 22, 2019, at the Reynolds-Jonkhoff Funeral Home, 305 Sixth St., Traverse City, MI, 49684. Rev. Kathy Snedeker will officiate. A celebration of Don’s life will be held on Monday, December 23, 2019 from 3:00 to 5:30 p.m. at Apple Mountain in Saginaw. In lieu of flowers, those planning an expression of sympathy may wish to consider a memorial donation to the Saginaw County Sports Hall of Fame Scholarship Fund, 500 Federal Ave., Saginaw, Michigan 48607. “Death is not the opposite of life, but a part of it.” Harki Murakami Please feel free to share your thoughts and memories with Don’s family at his tribute page at www.reynolds-jonkhoff.com. The family is being cared for by the Reynolds-Jonkhoff Funeral Home and Cremation Services.

Donald Barrett Lord, 79, of Traverse City, Michigan, and The Villages, FL passed away peacefully on November 24, 2019. With his wife, children and grandchildren surrounding him in his final days, Don remained the strong and honorable example... View Obituary & Service Information

The family of Donald B. Lord created this Life Tributes page to make it easy to share your memories.

Donald Barrett Lord, 79, of Traverse City, Michigan, and The...