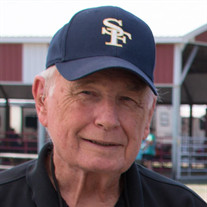 Don, also known as “Papa Don,” to his 22–and counting— grandchildren and great grandchildren, was born to Marie and Robert Ludka on February 25, 1941. He passed peacefully on December 26, 2019 at the Munson Health Care Hospice House surrounded by his loving family. Complications related to pancreatic cancer took his life, but not before he could enjoy his favorite Christmas meal of prime rib. Don’s business acumen was well known, as was his prodigious work ethic. For most of his working life he held two full-time jobs concurrently while raising five children with his high school sweetheart and beloved wife of 57 years, Jean Ann Carroll Ludka. Over the course of 47 years, Don’s professional pursuits included work in meat packing, meat processing, sales, and retail. He and Jean owned and operated “The Lollipop Shop”, and later, two 7-11 stores in Traverse City. Throughout his career, he modeled for his children and grandchildren the value of a hard day’s work. At one point or another, all his children and many of his grandchildren honed their math skills working a cash register. They also learned to assist customers, keep a clean store and catch the occasional crook—Don was always the example in dealing with everything the stores could throw his way and had many funny stories related to people who thought they could take advantage of one of the younger “employees”. Over the last few years, it became common for regular customers to ask Don when he’d retire. His reply was always that he’d retire “When you see Reynolds-Jonkhoff drive up to the front door of the store.” He had a keen wit and could see the humor in almost every situation. Don loved to eat, but more than that, he loved to cook and share a meal with those he loved. He was the consummate “Iron Chef” and had his very own personalized chef’s uniform which he wore proudly in his kitchen. He and Jean opened their home to all family members every holiday, conjuring a meal that left no one hungry, and rewarding each of us with “to go” boxes at the meal’s end. In his kitchen he was a gourmet, but on the road, one could not travel with Don without stopping at some of his favorites...Freeway Fritz, Clyde’s Drive In, Alice’s Kandy and Korn to name just a few. Don spent every Sunday surrounded by family, sitting on the couches watching the Lions or U of M with grandkids running wild and having fun with their many cousins. He loved the commotion of a large family, always exuding a calm, comforting warmth as he sat back, teasing and cajoling—observing the loving, joyful relationships he and Jean had nurtured among their children and their children’s children. By his example, they all learned to be selfless, kind and loving parents. His wife and kids always came first and there was no sacrifice he was unwilling to make to ensure their happiness. He was so devoted that he thought nothing of driving Jean and the girls to Somerset Mall, commandeering a scooter and spending all day running packages from stores to his car while they shopped. He would drive Jean to Birch Run, sitting in the car to wait—unless the store sold sofas, in which case he’d occasionally nap in a particularly cozy display window. Don’s sense of humor and quick wit was legendary and earned him a number of loyal friends and employees over the years. He maintained those strong relationships by treating his customers and partners with respect and by earning the respect of those he did business with. He was profoundly generous, often to a fault. He was always thinking of ways to help those in need and he followed through on every idea he had. Don was an ardent Catholic, and often talked of Jesus Christ. He looked forward to meeting Him in the hereafter, a place where the Lions never humiliate themselves and their many devoted fans in public. He instilled a sense of competitiveness in all of his children, as he was a sportsman in every sense of the word. He supported every endeavor of his children, especially those revolving around St. Francis sports. He was a fierce advocate of his children but could also let them know if they had overstepped. He will be sorely missed at St. Francis football games that won’t be the same without him in the stands or pacing behind the bleachers when the outcome was uncertain. We learned so much from this wonderfully humble man and he will be missed by his entire family and many acquaintances. He is survived by his wife Jean, children, grandchildren and great grandchildren: Mark & Suzette / Maria (Timmy and Vivian Ryan), Jonathan, Anna, Nicholas; Chris & Cyndi / McKaely (Matthew and Henley Johnson), Anthony, Max, Remo & Sam; Ben & Andrea / Olivia, Helen, and Rosie; Courtney & Aaron Biggar / Matthew, Luke, Eli, Zachariah; Josh & Brandee / Brenen, Maren, Harper, Hannah; Sisters Linda (Jerry) Dell, Barbara (Mark) Ciolek and many extended family, friends and colleagues. The family wishes to thank the Munson Healthcare Hospice staff for their loving and compassionate care in Don’s final days. Memorial contributions in memory of Don may be directed to Traverse City St. Francis Athletic Department. Funeral arrangements have been made with Reynolds-Jonkhoff. Visitation will take place on Monday, December 30, 2019 from 5-7 PM, with the recitation of the rosary at 7 PM. The funeral mass will take place on Tuesday, December 31, 2019 at 11 AM at St. Francis Catholic Church, with visitation preceding the mass starting at 10 AM. Burial will take place immediately following the mass at Memorial Gardens of Traverse City.

The family of Donald Edward Ludka created this Life Tributes page to make it easy to share your memories.

Don, also known as “Papa Don,” to his 22–and counting— grandchildren...