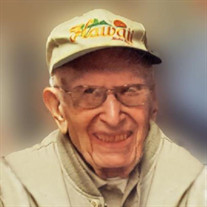 Donald “Don” Revere McMillen, 94 of Traverse City, passed away quietly on July 12, 2020 at Munson Medical Center. His friend and guardian, Rosie Duell, was at his side. We are saddened by Don’s loss but know he lived a long and fulfilled life. He proudly lived on his own and even drove his car, right up to the end. Don was born in Hancock County, Ohio, November 20, 1925, the son of Dean and Rhea (Pore) McMillen. Don spent his childhood in Dunkirk, Ohio and then served honorably in the U.S. Navy. Don served stateside during WWII as an Intelligence Specialist, aiding in the detection of foreign spies. Don moved his life to Northern Michigan in the late 1940s and would remain there for the rest of his life. He would go on to have a lengthy career as a machinist at Cone Drive Gear in Traverse City. Don frequented a cabin in the Western Upper Peninsula for many years. He was an avid hunter of all sorts and enjoyed that well into his seventies. He was a talented woodworker and painter; his work adorned the walls of his home. He was a quiet and gentle person, who did not brag or have any cross words to say. He saw people through a pair of kind and non-judgmental eyes. He loved to reminisce on his fascinating past, but took even more joy in listening to others about their own lives. Don was fastidious and organized about everything around him, including his incredible memory. Don was preceded in death by his parents; wife Kathryn McMillen; brother Edward; long-time companion Grace Smith; and best friend Raymond Duell. Don is survived by his dear friend Rosie Duell, and all of the Duell family who “adopted” Don as one of their own; two sons of his companion Grace, Theodore and Thomas Smith; and close friends, the Wayne Radcliffe family. A graveside service will be held 4:00 PM, Friday, July 24, at Grand Traverse Memorial Gardens. Memorial contributions may be made to Cherryland VFW Post #2780, 3400 Veterans Dr., Traverse City, MI 49684, or to the National Fragile X Foundation, 1861 International Dr., Suite 200, McLean, VA 22102. To share a memory you may visit Don’s tribute page at www.reynolds-jonkhoff.com

The family of Donald Revere McMillen created this Life Tributes page to make it easy to share your memories.