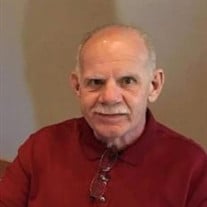 Msgt. Donald F. Pasco Sr. (Moose) of Grawn, MI passed away April 22, 2021 at the age of 73. He was born in Sandusky, Ohio. He spent his early years in Detroit, MI then moved to Northern Michigan in 1969. He honorably served our country in the United States Air Force for 22 years and was a Master Sergeant in FMS and QA as an aerospace propulsion technician and section supervisor. He served during Vietnam and did a tour in Thailand. He earned 7 medals of honor and 3 ribbons. He loved sharing stories of his tour. He enjoyed learning, researching, and fixing things. He was an avid animal lover. Wild birds would eat right out of his hand. It didn't matter what kind of animal you were, if you showed up in his yard, you got fed. He only loved one thing more than his animals (and family) and that was the love of his life, Janet. They were married for 26 years. They were proud to say that they never once fought during all those years, they were true soulmates. They enjoyed the little things in life, like cooking together, talking about current events, taking care of their animals, and just being around each other. Don is survived by his loving wife Janet (Warnick) Pasco, his children; Donald F Pasco Jr., Clyde Pasco (Wendi), and Cori (Pasco) Kennedy, one of his best friends and sister Marcia Pasco, mother-in-law Lois Warnick, stepchildren; Mark Basch, Mandy (Basch) (Paul) Peterson and Trevis Basch, grandchildren; Tony, Branden, and Kaitlyn Kennedy, Nikolas and Ramona Pasco, Gabrielle Pasco, Bryton (Aleesha) and Brandon Basch, Dalton, and Zachary Basch. He is preceded in death by his parents, Nicholas Pasco and Mildred (Johnson) Pasco, and his brother Jim Pasco, Dennis Macky, and Charles Johnson. There will be a memorial service later this year to honor his life. He will be buried in Maple Grove cemetery in Grawn, MI. Please share a memory with Don’s family by visiting his tribute page at www.reynolds-jonkhoff.com. The Reynolds-Jonkhoff Funeral Home and Cremation Services is serving the family.

Msgt. Donald F. Pasco Sr. (Moose) of Grawn, MI passed away April 22, 2021 at the age of 73. He was born in Sandusky, Ohio. He spent his early years in Detroit, MI then moved to Northern Michigan in 1969. He honorably served our country in the... View Obituary & Service Information

The family of Donald F. Pasco Sr. created this Life Tributes page to make it easy to share your memories.